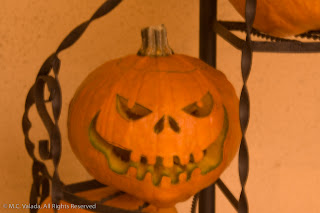 I can't remember when it started, but a number of years ago our friend Gillian Horvath initiated a pumpkin carving party for Halloween. Sunday was the latest installment.

Len's contribution is the first photo up. He draws from scratch. He's done SwampThing, Batman, the Bat Symbol, and a variety of other things. The pumpkin he chose this year turned out to be somewhat unripe, resulting in the fascinating green outline to his carving which you can see before we lit the candle. 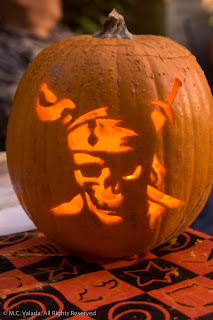 This Jolly Roger was carved by friend Jesse. She added a second carving on the back which casts an image reading "TELL NO TALES" which may show up in some of the other pictures, but it was quite hard to capture. Some of the other pumpkins also had rear carvings. In the big group shot, the top pumpkin has a haunted house which casts ghosts on the wall slightly to the right of the pumpkin and in the middle on the left of the same photograph, you can seek the cast of a bird in flight.

Some of the other pumpkins show bats in flight, a couple of rats, a mummy with the wrap over one eye undone, a howling wolf, and Chewbacca. Next year, I'll remember my tripod.

It is all great messy fun. Gillian has insisted that we remind her that she must hold this party each year because it is too much fun to forego. Martha Stewart can eat her heart out. 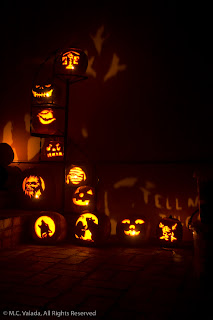 On Saturday night we went to the annual Niven Halloween event. Each year Larry and Fuzzy have a theme for their party and this year it was "Come As Your Second Life Avatar." This was a tough theme, because I've got a pretty good first life and I don't need a second life. I finally decided that since I often describe myself as 18 with a lot of years of experience, the avatar should dress like it was 1969. Out came the jeans, which I needed to cut to unravel at the ankle, a peasant blouse, a mesh-crocheted poncho I made while sitting in an English class that year, and the peace symbol necklace my college boy friend brought me from Spain. I put a paisley scarf around my forehead and tied it on the side and put on a pair of sandels. Perfecto!

Last year, we were supposed to dress for the year we were born. I had to pull out the sewing machine to make a skirt as full as they were that year. I took a whole lot of clues from "I Love Lucy" and had my hair dresser do my coif like Lucille Ball and then I pulled out the bright red lipstick and nail polish. Often, I wish we had more lead-time.

I can't remember when Halloween turned into a time for decorations at home. I do remember the competitions to paint scenes on the windows of the stores on Main Street in my home town, but we really didn't do anything at home. Now, I've heard, it is second only to Christmas for decorating frenzy. One of the houses we passed on our way to the Niven's house looks like 1313 Mockingbird Lane, with its big gate and orange lights. Another had lit pumpkins all along the fence. In a gated community, it is less likely that someone will come along and destroy things, I guess. At home, Len's been known to put up some decorations like a skeleton on the door or a banner off the flag pole. We don't get many trick-or-treaters, which is a big disappointment to us both. What's Halloween without beggars at the door?
Posted by M. C. Valada at 2:45 PM