I'm exhausted, but I got through the Nebula Awards(R) Weekend with little more than the hitch of a Final Cut Pro file which took a Hollywood editor friend a few hours to translate into something we could actually show at the awards ceremony. Janis Ian (photo below) was a fantastic Toastmistress/Mistress of Ceremonies and Chuck Lorre gave the best testimonial ever to the Nebula Award brand during his keynote speech (punctuated by a guitar-tuning pitch pipd--hysterical.) 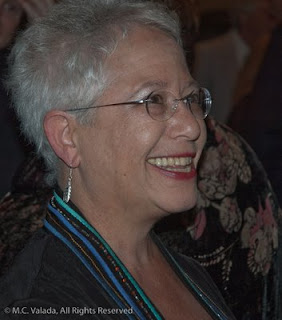 Len and I left for the hotel a little later than we had planned because our fire-damaged house had been broken into overnight. This followed by one day our discovery that vandals had ripped the side door off our locked garage and pawed through our stuff (after we spent a day putting the garage in order and putting new locks on it.) We checked into the hotel, checked on registration for our event, and went off to find ourselves some lunch. Then I remembered that I was supposed to get a package from Joss Whedon's assistant--a disk with Joss' speech accepting the Bradbury Award, since he's in Canada shooting a film.

"There's no package for you," says the girl behind the desk. O.K. I went to finish my lunch. After lunch, I decided I'd better check my e-mail. Sure enough, e-mail from Joss' assistant. "I called the hotel and they said the package came and you picked it up." Oh, good. A problem. A big problem.

Several hours later, after the front desk lied again at least twice and I had to call my hotel contact for our events, I got the package. I did not immediately try to play the disk because it was time for me to run off and start the cocktail party. We went on to what turned into a very late dinner because the kitchen took an hour to get food to the table after my husband and a friend of ours had appetizers.

Following that, I took the secretary of SFWA, techno-goddess and puppeteer Mary Robinette Kowal, back to the room to check out the video. Good thing. We couldn't open it. Our efforts included a late-night e-mail to Joss' assistant, who immediately called us back with suggestions. Mary took the file with her and put out an APB for someone who might be able to convert the file. I saw that early on Saturday morning and woke my friend Becky Lillienfeld, who is a film editor and whom I knew owned Final Cut Pro. Becky spent the day working on it and managed to get the file to us in working HD form (despite slow upload and download times.) Crisis averted. You can see Joss Whedon's acceptance speech here.

Janis Ian wrote a new set of lyrics to "At Seventeen" to honor as many writers and stories as she could. It was funny and touching, leaving many people with tears in their eyes. Janis might record the number and make it available on her website, which would be wonderful.

Chuck Lorre was my keynote speaker and he did not disappoint. He used a guitar tuning pipe to punctuate his story about "Cross-eyed Larry" who gave him a dog-eared copy of the Martian Chronicles when Chuck was 12. It was just perfect. I hope the editor of this year's volume of the Nebula Awards anthology decides to publish the speech. 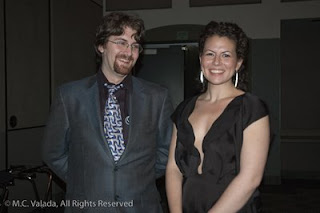 My niece Stephanie Valada-Viars (in the photograph above with my son Michael) made a lovely awards girl. One table passed a motion that she do these duties at all further Nebula Awards Ceremonies.

Bruin TV covered the event and here's the video report


It's been seven years since I chaired my first Nebula Awards Ceremony. I'd like to do it again, but I hope I don't have to wait 7 years to do it again.

Oh, I got a thank you gift from SFWA for doing it this time: five sterling silver horses--three pendants and two pins--a nice start on rebuilding my collection.
Posted by M. C. Valada at 11:15 AM