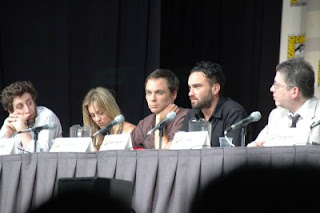 Today's the day I actually braved the crowds and went over to the convention center to catch The Big Bang Theory panel. I did cheat a little bit by imposing on my friendship with Bill Prady to ask for guest passes, so we could have decent seats without having to sit in line for hours. I met up with Bill's assistant and got our passes and one for actress Chase Masterson. 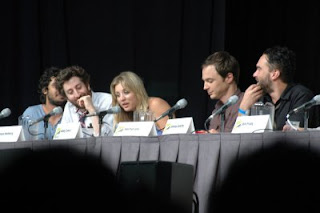 The cast, along with co-creators Chuck Lorre and Bill Prady put on an hysterical panel. It was preceded by a clip reel of scenes which relate to Comicon attendees. A huge favorite is "Rock, Paper, Sissors, Lizard, Spock" which JimParsons was asked to do live. He can't. Apparently, every one of the 12 or so takes will be available on the Season 2 DVD set, due out in September.

Jim did a great job answering the question about how Sheldon would respond to being nominated for an Emmy Award (as Jim was last week) and what he'd do for an acceptance speech when he wins. Here's the response:

And now, it is time for me to walk over to the Hilton for the Warner Bros. Television reception where I'll see the folks from TBBT and meet the folks who are bringing Len's baby The Human Target to the small screen this winter.
Posted by M. C. Valada at 5:37 PM