The Last Day of Christmas

I'm coming off a nasty cold which threatened the success of our 12th Night/housewarming party.  The good news is that it did not succeed, but only because some lovely people came into the kitchen and pitched in to get all my food and drink out and keep the wine glasses clean for more guests.

We had just under 100 people, which would have split the seams of the old house.  Fortunately, there was no appreciable wind that night, so people seemed quite happy to go and stand out on the patio to talk.  It was a bit too cool for those of us recovering from colds, but other people were fine with it.

As in past years, I took amusement from watching people react to meeting someone they never in their lives thought they would encounter.  Particularly folks who had a dawning realization that the tiny white-haired woman they were hustling around my kitchen had been a teen-aged folk prodigy.  Or when the TV exec who was a huge Jeopardy! fan discovered that I had been on the show six times and that there were two other Tournament of Champions competitors in the house--and she had never met anyone who had been on the show before.  Yes, we throw those kinds of parties.

The puppies managed to escape from Michael's room a couple of times, but we headed off any attempts to get out the front door.  Dexter did a quick retreat when he stuck his nose out and our friend Ed, veteran of a K-9 detail in the service, let him know this was not acceptable. Dex even shut the door behind himself, which the babies did not do voluntarily.

I can't say I have partied to almost 3 a.m. anytime recently, but that's when the doors shut and Len and I stumbled off to sleep.  If only we didn't get a wrong number ringing at 10 a.m. on Sunday.  I'm almost finished with the pots and pans, but what I don't get, my cleaning lady will handle tomorrow. 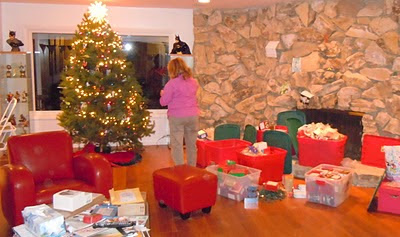 I'll be taking down the three trees this weekend, and will try to store the ornaments so next year it will be easier to find those for the "specialty" trees.  I've got lots of boxes, color coded for the holidays.  Putting things away requires nothing but time.
Posted by M. C. Valada at 3:35 PM