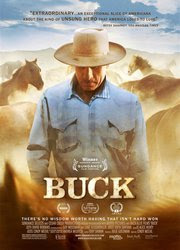 I finished reading The Faraway Horses a few weeks ago and was deeply moved by Buck Brannaman's life story. He overcame an abusive father to become one of the premier practitioners of natural horsemanship, learning from the Dorrance brothers and Ray Hunt.

Buck did clinics at Pierce College before I started learning to ride here, and, unfortunately, has not been back since I bought my boy (there haven't been any clinics here at the sinfully underutilized, taxpayer-built facility for about five years--ever since the school kicked out the boarders.)

I feel fortunate that I was able to attend or watch a number of clinics here with the amazing Harry Whitney, but I would like to attend a clinic with Buck.

The next best thing is to see the wonderful documentary Buck, which opens in Los Angeles and New York tomorrow, and opens wider next week.  The film won the viewers' choice award at Sundance and when you watch it, you will understand just why.  It's not just about a relationship with horses, it is about all kinds of relationships.

I was lucky enough to attend a screening of the film on Tuesday night which had a Q & A with Buck after the film was over.  I was very surprised that I did not recognize a single face in the audience, but it was a benefit for Homeboy Industries, so the tickets cost a bit more than your typical night at the cinema--but not all that much more for a date these days.  My friend (and superior horsewoman) Melinda Snodgrass had come into town that afternoon and my newly horse-addicted niece Kristina was staying with us, so they got to come along with me.

I arranged to have Kristina take riding lessons while she was visiting.  She went to Ireland a few years ago and took a few there, and I got her to the barn last year when she came to see me compete on Jeopardy!.  This year, she was in California for three weeks and managed to get a lesson most of the days she was here.  Being tall (around 5'8"), weighing slightly more than the average feather (perfect for the working actress she is), and, as described in a recent review, "leggy", she has a much more perfect body for riding than her doting aunt (who thinks it is a good skill for Kristina to add to her acting resume.)

Kristina immediately applied concepts from the film to her new skill.  She was able to describe how the two horses she was riding in lessons mirrored or responded to what she was doing in the saddle and on the ground with them.  I was very pleased.  I'm sorry she probably won't be able to take any more lessons until the next time she comes out to visit, but now she knows she can mount from the ground (oh those legs), post and sit a trot, and control a horse who decides it is time to take off (even though she hasn't actually learned the canter yet.)  She'd look spectacular in a dressage arena, but the one lesson in a western horse had her declare "I could sit this trot all day long."  That's how I feel about Ace's trot.


Melinda decided that her Lusitano stallion Vento would really enjoy the cow work that Buck does in his clinics with more advanced riders.  I'd love to watch that clinic.  If I were an advanced rider, I'd put Ace into one.  He has no fear, and an appropriate amount of curiosity, about cows, both from his early days in New Mexico with Melinda (who bred him) and when he was boarded at the college (which does still have an agriculture program, though most days it looks like it is being dismantled.)

In response to the Q&A, Buck said he's doing a clinic out here next year.  I'm staying alert to find out when that will be, because I'd love to attend it.

If you happen to live in Los Angeles, Buck Brannaman will be in attendance at the 7: 30 P.M. showing of the film on Friday, June 17, at the Landmark Theatre in the Westside Pavillion on Pico Boulevard and at both the 7:00 P.M. and 9:30 P.M. shows on Saturday, June 18 at the Arclight Theatre in Hollywood (which has reserved seating.)