The Rose Bowl Swap Meet is where all those things your mother threw out go to find a new home. 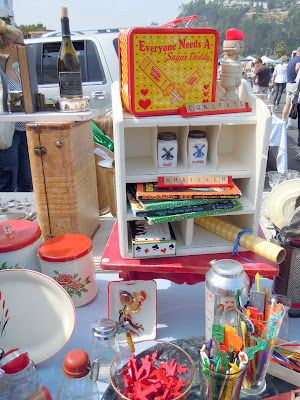 Held the second Sunday of every month in the parking lots surrounding the famous sports arena, the Swap Meet attracts a diverse crowd from bargain seekers to serious collectors and makes for some decent exercise. Many dealers have been there longer than I've been a customer, like the owner of this booth of old glass bottles. 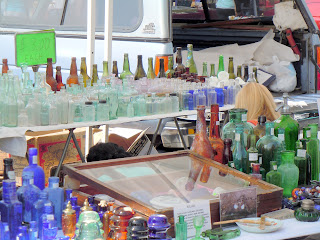 My first foray was twenty-two years ago during my first summer in Los Angeles when I was a law clerk at the Writers Guild of America, west, Inc. Len's friends made it a monthly outing, culminating in lunch somewhere in downtown Pasadena, so we could compare our finds. Back in those days, parking was free and admission was in the $2 range. Now, priority parking (not to be passed up, IMHO) is $15 and admission after 9 AM (die-hards get there around 5 AM) is $8.00. It is no longer a reasonable place to go just for the exercise. 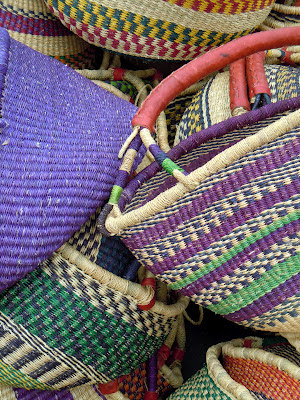 I hadn't been to this particular swap meet for a number of years, probably going back to before our house fire. Once I got Ace, spending money on miscellaneous stuff for which I had little room didn't seem like such a great idea. Len has long lost the stamina to cover the Rose Bowl, which often became a 4-5 hour expedition with no likelihood of finishing the entire thing. There's another swap  in Pasadena that meets on the first Sunday of each month and doesn't have an admission fee (parking is a mere $2.00.) Since many of the same antique/collectible dealers attend both, and the first Sunday swap meet at Pasadena City College can be completely covered in less than 3 hours, it has become my preferred shopping experience.(Not to mention that many of the dealers set up in one of the parking structures on campus, so it is actually reasonably comfortable to go in the summer time.)

On Sunday, however, Len was out of town and I woke at a reasonable time to get over to Pasadena for a long walk. Besides the sticker-shock of parking and admission, I found that the layout had somewhat changed and, in some areas, the crush was bad because there's some major construction going on at the facility. It looks like they are trying to add skyboxes and it is ruining the aesthetic of the place. I'm sure the neighbors aren't particularly happy about this. 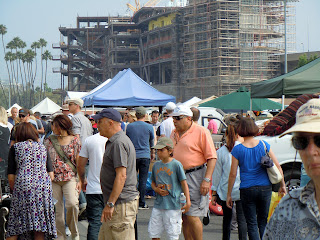 I found something to purchase mere minutes after starting my way through the dealer maze: an Aynesley Cottage Garden egg to add to my collection of the English china pattern. I decided to forgo the other three pieces the dealer had because I don't really need two more small vases that match. 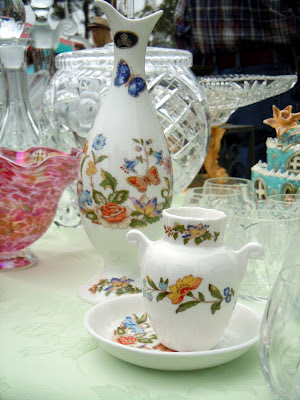 These are the three pieces I left behind.

There were a couple of things I got excited about, but I didn't have a strong body like my son with me to carry furniture to the car or wait while I brought it around for loading. So no drop-top maple table for a chess set. Then there was a 1960s stuffed chair that looked like a hand that made me laugh but I doubted I would want to live with it for long. 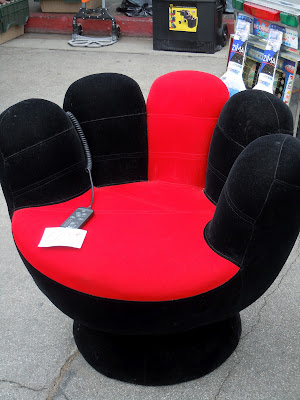 I did see an extremely nice 1940s-1950s linoleum topped table with four matching chairs, but I have no place for it. I also saw two art deco china/curio cabinets that were extremely tempting. They were what reminded me that the Rose Bowl is probably the best place to look for vintage furniture, short of hitting every estate sale in the region on Saturdays. 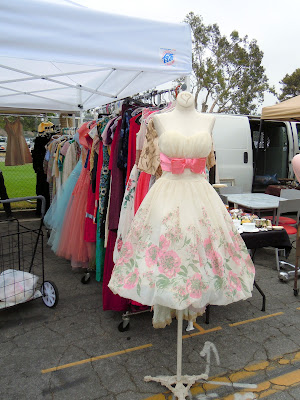 It has always been a good place to find clothing--I once bought a beautiful silver mink stole (lost in the fire) for $15--and Len's bought all kinds of costume parts in the past. On this trip, there were many dealers in vintage linens and several booths had vintage fabric. I'm considering taking some of the boxes of fabric I've got in storage to find a new home. 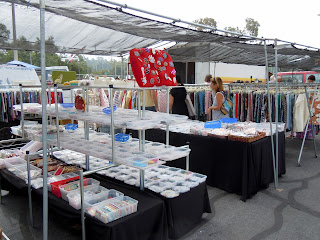 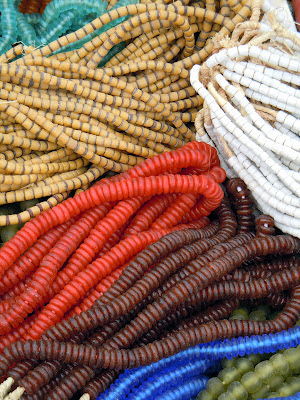 There were several booths with beads for sale, and I liked the colors in the sunlight. If I were into making jewelery, I would have bought some. I prefer to buy jewelery ready-made, though. I did see two pieces of jewelery in the shape of horse heads that I liked a lot. One was a bakelite piece and the other was reverse-carved acrylic. There was also an acrylic greyhound which made me think about my grandfather's second wife, who raised whippets. The bakelite piece was $400--way beyond my price range--and the acrylics were more than the cash I had on hand. It is best to carry lots of cash, since so few dealers take check or credit cards.

I managed to find a couple of gifts, so the admissions costs were amortized somewhat. Because it gets so hot in the summer, I am unlikely to hit the Rose Bowl Swap Meet again until October or November. I do think I should try it a bit more often than every five years. It can be more fun to go with a group of friends, but it is more efficient to go alone.
Posted by M. C. Valada at 4:13 PM