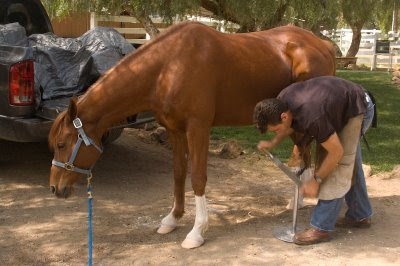 O.K. I've been remiss about blogging. It's been such a busy bunch of weeks that I didn't realize it had been 5 weeks since Ace's feet had been trimmed until I wrote a check to my farrier today. No wonder his left fore was so out of balance when the vet looked at him on Thursday. Bad Mommy.

I'll be moving Ace to my trainer's place this week. She had an opening at the location a few blocks away where she does most of her teaching. There's an 8 stall barn plus several pipe corrals. Ace is getting the newest pipe corral and we've made him a house at one end of the 12 x 24. He'll have a 12 x 12 partical enclosure (walls on 3 sides) to stay out of the wind and wet, and it will help keep his shavings from blowing away. He'll be able to watch everything, but there will be no territory wars over fences. Last week, he wound up was a very squishy swelling in his back right leg above the fetlock which I am sure was acquired kicking at the tyrannosaurus rex who recently moved in next to him.

There will also be plenty of little horse-loving girls to fuss over him while I'm not around. And he loves to be fussed over, around, and about.

I've been trying to find a tack shed. The one I have at the current barn is a plastic Suncast which is approximately 7 x 3 feet and 7 feet high on the exterior. It's just a bit too narrow, but I had no idea how expensive they were until I started shopping. I think I've found the one I'm going to buy. It's not perfect, but it will work. I'll just have to be better about stacking things and not forget that I've also got a Suncast bench seat for additional storage.

Tomorrow is Ace's birthday. He will be 12. He was just over a year old when I first saw him and it was three years later that I decided to buy him and bring him out to Los Angeles from New Mexico. I am so glad I did.
Posted by M. C. Valada at 6:36 PM

Happy Birthday to Ace. I'm sure he's going to love his new home, what a great birthday gift for him. I hope you both like it better in the new place and all the young girls spoil him rotten.
We're having some lovely spring weather and the snow is gone so all the horses are enjoying their mud and rolling in it constantly, you must be enjoying some nice weather now before the summer heat arrives. Have a great time riding.

Looks like Ace is a great pony for the farrier. That's pretty cool. And five weeks between trimmings sure isn't much to apologize for. Lots of times mine aren't even ready for a trim until six weeks even in peak growing season. Ace may just grow a "lot of foot" as they say. It's hard to keep up with those types because they don't always grow the same. LOL

It took a while for Ace to become a great pony for the farrier, but now he is usually very, very good.

He was a bit frantic when we put him in his new house, but he's settling in. I'll write more about that soon.