A few years ago, I got involved in doing still photographs for a live, on-stage version of What's My Line, a show about which I had fond memories.  Most of them involved visits from my New York City cousins and watching the show at the Breezeway Motor Court at the edge of my home town.  But every so often, when the show was re-run on The Game Show Network, I'd catch an episode I remembered well.

The stage version was a lot of fun. My husband, Len Wein, was one of the recurring panelists, and we met a lot of fun folks through the course of the run.  When it moved to New York for a short run, my sister lent a hand to the show and even directed two or three performances when regular director Jim Newman had to leave town.

Host J. Keith Van Straaten is back in L.A. with a new stage game show called The Fix-up Show.  He tried it out in New York for a while and now it is settled into the Acme Theatre on La Brea on Wednesday nights at 8 for the next month (excepting the night before Thanksgiving.)  I'm doing photographs again (except next week, when Len & I will be off to a party for the premier of the second season of Human Target).
The purpose of the show is to set people up on dates, but the potential daters don't get to directly interview each other.  In last week's show, a young woman was being set up with one of three potential young men.  The panelists consisted of two people well acquainted with the young woman and celebrity panelist Walter Koenig (below.)  Hilarity ensued, particularly over a question about bacon ice cream. 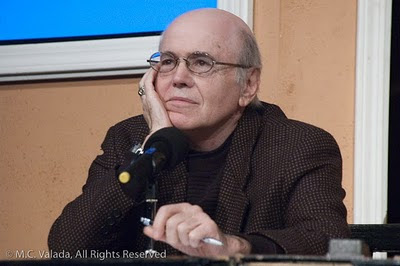 J. Keith has uploaded a selection of my photographs here.  This week's celebrity guest is everybody's favorite native of Cleveland, Drew Carey.  It should be a great show, and seats are available.

And think about having dinner before or after at Amalfi Restaurant, which shares the building.  I've had some really good meals there over the years.
Posted by M. C. Valada at 10:44 AM