New puppy.  Did I mention the new puppy? 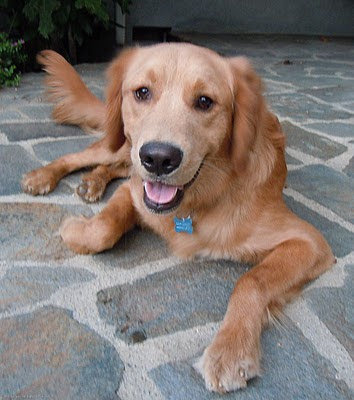 His name is Riley.  He turned 10 months old on Thanksgiving, making him just a few weeks older than Ginger.  He's a purebred Golden Retriever, being the dog of choice at this house, and we rehomed him from a family in Camarillo.  He's a sweetheart, but definitely a puppy in the mode of Ginger.  The two have bonded, making Dexter roll his eyes in frustration with their antics.  Dexter remains the most perfect dog who ever lived.

Drew Carey was the celebrity guest on the second installment of "The Fix-up Show."  He's a comics fan.  He came to the episode of "What's My Line" when Len was a guest (rather than a panelist) and came over to introduce himself at the end of the show.  Then he took us out for dinner. 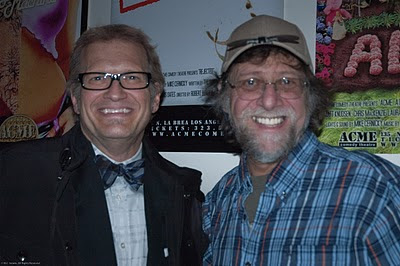 I didn't have a camera ready that night, but I did this time.  Here are Drew and Len after the show.

Thanksgiving usually means a much bigger number than 11 at my table, but by the time we sat down, my expected 15 was down to that.  We moved the living room furniture into the front room (in the background), where it all fit quite nicely, and we pulled the dining room table out to its 14' length.  Everyone had plenty of room and Harlan Ellison missed out on a terrific meal. 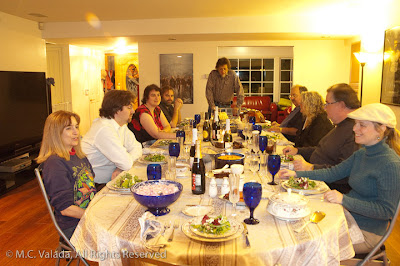 The food I'll write about over on my food blog.

Now it is time to get ready for Christmas, although we do light a mennorah for Chanukah.  I've decorated my white, pre-lit stick tree with cobalt blue ornaments, making it a lovely Chanukah bush.  So far, the puppies are leaving it alone.  I have no idea what they will do when we get our cut tree up and loaded down with geek ornaments in a couple of weeks, but I'm hoping for the best. The puppies are doing a real number on the landscaping in the back yard.  I may have plenty of places to plant tomatoes next year by the time they finish excavating their dens out among the trees and bushes.
Posted by M. C. Valada at 2:22 PM