I tend to read more fiction than non-fiction for pleasure, probably because I have so much non-fiction to read to keep up with the fields of law I need to know. Much of the non-fiction I read is biographical, and thus I come to Prisoner of Trebekistan, written by Bob Harris.

Bob Harris is a memorable five-time Jeopardy! champion. As I've probably written before, Jeopardy! is a daily ritual for our house and last year I even managed to make it on to their potential contestants list (although I could not go on when they called because a friend was doing effects editing on Spider-Man 3. Rats!)

Bob was a very funny contestant who also did commentaries on KNX, the radio station I listen to most of the time in L.A. because it gives frequent, necessary traffic information. About five years ago, a friend of Len's wanted to introduce us to his neighbor Bob because Frank thought we'd really like him. Frank never got around to making the introduction, so Len and I now feel we've wasted five years of potential friendship because we got to meet Bob in July when he was a co-panelist with Len on What's My Line Live on Stage. It was like meeting an old friend rather than a new friend and now Len and I have both finished reading this delightful autobiography with hi 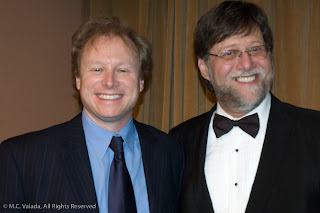 nts on how to prepare for Jeopardy! I think Bob's way is a little too obsessive-compulsive for me, but some of the hints are quite useful.

I highly recommend this book which is in turns funny, insightful, touching, and heart-breaking. And I must recommend Bob's website/blog which I now check on a daily basis and which you can find right here. For a sample of the book, here is an animated promotional video, with Bob reading about answering the Final Jeopardy! question which would put him in the finals of the Tournament of Champions. On his website, there is actual video of him reading a passage about J.J. Newberry's, which is priceless for those of us who remember the store.

I've attached the photograph I took of Bob (on the left) with Len after What's My Line last month. I have no idea where it will actually show up in the blog when I go from entering it to posting it. This program leaves something to be desired in that way.
Posted by M. C. Valada at 10:01 AM