Back to the Future with WML 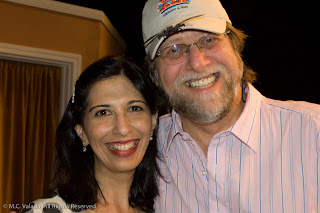 The double dose of What's My Line Live on Stage on Sunday as a charity event was great entertainment. Of particular fun for us was meeting Rose Abdoo, who was on the first panel of the evening, along with our friend Andy Zax. Rose played Gypsy on Gilmore Girls, the wonderfully written series created by Amy Sherman-Pallidino and a big favorite of ours. Rose will be in the new Sherman-Pallidino show The Return of Jezebel James. Rose stayed through the second show so she could have her picture taken with Len. She said there was a closet in her house fille 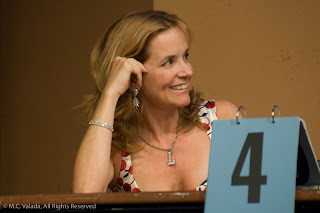 d with comic books he had written.

The fabulous Lea Thompson was the mystery guest on the second of the back-to-back shows Sunday night. Despite her faux French accent, her friend Elaine Hendrix guessed her after only four "no" answers were given to the panel. She looked just great. In addition to her acting work, she's directing these days. It turned out she had been in the audience with us on Saturday night at Falsettos 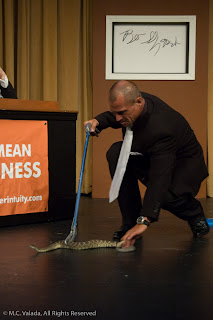 watching her Caroline in the City co-star Malcolm Gets play Marvin.

The two panels each managed to guess half of their guests. The big reaction of the evening came with Bo Slyapich who catches rattle snakes--he brought one with him and had it out on stage as you can see in the photograph. I watched one woman jump out of her seat and had to keep the friend sitting next to me from doing the same. Len, who was sitting in the front row wasn't particularly thrilled with things either. Me, I'll handle non-poisonous snakes but I do worry about running across a poisonous one when I'm walking Ace out on the trails in the hills of Chatsworth.
Posted by M. C. Valada at 8:27 PM