To Boldly Go: Recognizing Trek Writers on the Strike Line 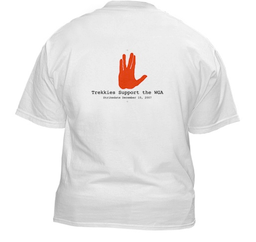 Considering how badly many writers were treated by Gene Roddenberry and some of his successors, there's a certain pleasure in knowing what's going on over on Melrose Avenue today. Oh how I wish I could be joining friends like Harlan Ellison and David Gerrold outside of Paramount Studios for today's Star Trek themed strike event. I would so like to get one of the special tee-shirts the WGA printed up. Having a day job is definitely getting in the way of my avowed occupation as a creative rights activist.

Friend Gillian Horvath explained about the various strike locations she's been on last night at our Amazing Race (yes, it's reality TV and no, we don't boycott it) watching dinner (this shiksa managed to make a nice brisket and latkes, even though I no longer eat red meat and brisket is a food I never ate with my Italian-American family.) She explained that the Bronson Gate at Paramount has "strike dancing" every Monday at 11 and it also has a "singles strike line" the same day. And I thought it was pretty funny 20 years ago when certain supermarkets in the D.C. area were identified as great places for singles to meet (the up-scale place in McLean was my favorite--rather like a Pavilions, Gelsons, or Bristol Farms is out here in L.A.)

Gillian gave us a demonstration of the "strike dance" choreography, complete with the drill team moves. Priceless. We agreed that the themed strike events are doing a lot to keep morale high during this trying time.

Meanwhile, the AMPTP showed its lack of good faith by walking out of talks Friday with a prearranged PR release blaming everything on the writers--after failing for four days in a row to produce the response to the WGA's counterproposal on Tuesday as they had promised. And Tom Short got IATSE to march in what was, in effect, a protest against the WGA strike over the weekend. No wonder they didn't want WGA members to support the demonstration. I have less and less respect for Tom Short every day and I can't help but feel much more sympathy toward the members of Local 600 who clashed with him (and lost their places in the board.) The man is acting like an AMPTP shill.

Some producer was quoted in the L.A. Times as saying the selfish writers don't care about the working stiffs. I've got news for said producer: my husband and his colleagues ARE working stiffs.
Posted by M. C. Valada at 10:46 AM