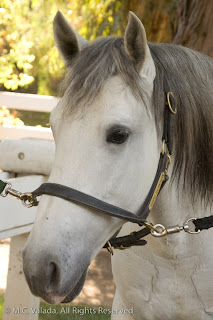 My friend Melinda Snodgrass, who bred the Arabian Prince I've owned for six years, just bought herself a wonderful Christmas present: a beautiful Lusitano stallion. He was imported from Brazil in the spring and has been living at Brookside Equestrian Center outside of Los Angeles. He's five years old.

People have some peculiar ideas about stallions being unmanageable or a danger to have around. I suppose this could be true, but I've recently had experience with two different stallions who are amazingly well mannered and give an absolute lie to this preconception. Both of them are far better mannered than some of the mares and geldings I've seen people own. Of course, the stallions' owners are both outstanding "lead mares."

Vento will be Melinda's new dressage horse. She lost her beloved Hanovarian, Steppi, about 18 months ago to colic. Vento's a bit smaller than Steppi was and Melinda really looks perfectly matched on him. I think it would be great to see him with a big red ribbon underneath her Christmas tree. 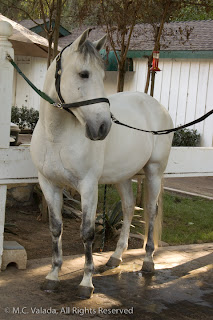 I figured I ought to go out and meet him while I had the opportunity. I even let "Talky Tina" direct me to go through downtown Los Angeles (early Sunday morning) to get there, which took about 45 minutes. If I tried that on a weekday, I'd still be in traffic.

When I got there, I was introduced as "Vento's visitor." "Vento gets visitors!" the trainer announced. He's supposed to be on a transport to his new home this week and I am so happy for Melinda. Vento looks like Shadowfax. He's got a ways to go before he is totally white (most white horses start off dark and shed out over time, but their skin remains dark underneath and technically they are called "grays" not "whites.") Vento's knees look like he was playing in coal, and there's still plenty of dark in his mane and tail, but he is expected to completely gray out.

The Brookside Equestrian Center was the location for the shoot of the 1940s version of National Velvet with Elizabeth Taylor. When I saw the film recently, I wondered where it had been done and I saw something on line which suggested at least part of it had been shot in Pebble Beach.

Brookside is gorgeous, but Melinda told me that when it was purchased by the current owner in the 1980s, it was a mess. I was very impressed with the way hoof cookies were cleaned up immediately and piddle spots were quickly washed down. The stalls were large and well-bedded, the tack pristine, and the people really nice. And there's a huge covered arena. When I got back to my barn, I told my friend that it's too bad the commute would be impossible, because we'd both enjoy having our horses at Brookside. There's nothing like it nearby, unfortunately.
Posted by M. C. Valada at 1:11 PM

Thank you, Chris, for posting these. They are wonderful photos. It's been weeks since I've seen him in person and I didn't have a good close up of his beautiful head. I'm hoping to get him on a truck late next week.