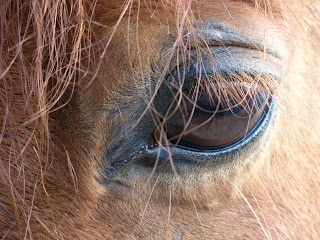 All things considered, this latest change in barns has been the easiest one on The Arabian Prince.

He has been weathering our latest rain and wind storms in great comfort. His new home is positioned in such a way that it minimizes the effects of the wind and, as I hoped, he stayed nice and comfortable and dry when it rained. His shavings are deep (since they don't blow away), so the sores on his hocks have healed up. And he's moving quite well with the pads on his newly shod feet cushioning him from rocks.

While I cleaned his stall the other night, he had a grand time thundering across the arena. He still needs a turnout buddy, but that kind of thing requires I spend a day at the barn meeting all of the other boarders and seeing if anyone is amenable to testing the relationship of two horses. Maybe Monday, when I've got the day off and if it doesn't rain, I'll be able to work something out.

It's not like he's alone when he's turned out, since all of the stall runs open into the arena. He's able to mutually groom the horses he likes and the other horses all like to hang out and watch the action. When the barometer was changing last week, several of the other boys were bucking as he'd zoom on by, kind of like parallel play.

Despite the wind, my trainer ponied (literally, since Gayle was riding a pony) Ace out on the trail yesterday. I would have like to see him being towed by a much smaller horse but I hear it went quite well. He's been losing muscle tone since he hurt his foot in December, but with the shoes it is back to work. Since the wind has died down (some areas had close to 100 m.p.h. gusts), I'm planning on walking him on the trails on Sunday and Monday. I can use the exercise more than he does.

I had a chance to talk with my friend Melinda yesterday and Vento (see my December 20 entry) has settled into his new home in New Mexico where he is the darling of the stable. The barn workers told her that he likes to stand outside and catch snowflakes with his tongue and then eats all of the snow off the fences. I guess they don't have much snow in Brazil. Melinda sounds happier than she's been in the 18 months since Steppi died. Vento's definitely a love match.

I discovered two blogs devoted to horses yesterday and I've added them to my places of interest list.

Blogger had listed Teachings of the Horse as a blog of note, so I paid a visit. The writer has lovely photographs and delightful entries about her two mares. Like me, she bought a horse for herself to fulfill a life-long desire. Unlike me, she gets to keep her girls in her own back yard. While I have no wish to return to the winters of the Northeast, she's had some great opportunities to photograph the horses in the snow.

From there, I followed a link to Grey Horse Matters, which has a great piece on "How to Fall." There's a bit of wisdom which says the only way to avoid falling off a horse is to not get on a horse. Sooner or later it will happen and it is a lot harder on older riders than it is on youngsters.

My worst spill was an early one, though not the first. I had owned Ace for 9 months and we had a difference of opinion as to the direction to travel combined with someone coming out from behind a wall. After I was suspended in the air like Wile E. Coyote (my sister's description, since she watched it happen) I tried to stop the earth from coming up at me. I was trying to avoid hitting my head on the equipment that someone had put in the arena. I broke my ulna, dislocated the radius at the elbow and broke it at the wrist. And, after the cast came off, the doctor discovered I had also torn my rotator cuff. This kind of an injury has its own special name. The doc said "I've read about them, but I've never seen one before."

A year or so later, I went flying off Ace one day in a group lesson, but the arena was soft and I was determined to hit the ground in a totally relaxed state. I landed like I would to make snow angels and I got up, got back in the saddle, and finished the class.

Then there was the day I passed out in the saddle in a Harry Whitney clinic. All I remember is people asking me my name, my horse's name, and my birthday and seeing Harry on Ace's back getting him past things. We did go to the hospital to make sure I didn't have a concussion, but I was back in the saddle the next day.

I'm still visiting the chiropractor for the spill I took in August. Nothing broke, but there's one lingering ouch that shows up after a day at work or when I wear high heels. I'm convinced I would have just walked away if the arena had been properly maintained--it would have been a softer landing. I've never had the wind knocked out of me before that flight. It was scarier than breaking my arm.

Len has a hard time understanding why it is never the horse's fault and I'm determined to get back in the saddle again. It's a girl thing.
Posted by M. C. Valada at 9:18 AM

Email ThisBlogThis!Share to TwitterShare to FacebookShare to Pinterest
Labels: Horses