Len's Going on the Road 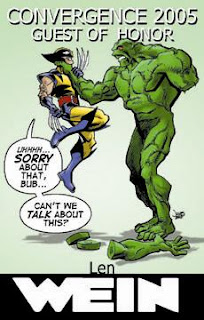 My best beloved husband, Len Wein, will be a guest of honor at Convergence, a convention in Bloomington, MN over 4th of July weekend this summer. Convergence is celebrating its 10th anniversary and has a number of returning guests of honor. I ran across this wonderful piece of art this morning. It falls into the category of comics cross-over. It was done for his Guest of Honor badge when he was last at Convergence in 2005 and (for you non-comic book fans) features his most famous Marvel creation, Wolverine, with his most famous DC creation, Swamp Thing. Swamp Thing is about 3 feet taller than Wolverine (Hugh Jackman notwithstanding.) Since both characters have their own form of regeneration, a fight would be a draw. Bernie Wrightson, who was the artist co-creator of Swamp Thing, will also be a guest at Convergence.

Len is also a guest at MidSouthCon 26 in Memphis , March 28-30, and he may have mentioned something in June, but I don't remember what. For anyone living in the greater New York area, Len expects to be in New York for New York Comicon the weekend of April 18-20, and is planning to appear as a panelist on the limited run of What's My Line Live on April 21 (about which more elsewhere.)
Posted by M. C. Valada at 8:21 AM