My husband, who has had no small impact on popular culture because of his creation of Swamp Thing and Wolverine, finds that he is possibly equally famous for a quote that appeared in Reader's Digest around 1989 thanks to his personal Boswell, Bill Rotsler. Bill used to follow Len around with a note pad and write down some of the pithy (or silly) things which came out of his mouth. Having discovered literally thousands of references to this quote, Len's gone and set up an office on Cafe Press where it is now possible to buy the quote on all kinds of merchandise. Better he should see a few dollars off of it than whoever starting selling bumper stickers of the quote without royalties to him several years ago. Here's the coaster: 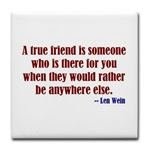