All gray horses start out dark and then go "white" as they get older. Blanco, one of the two horses who portrayed Shadowfax in the Lord of the Rings movies, looks like he may have had a blaze and four white socks when he was a baby. If you look closely at the photographs, the skin appears pink down the middle of his nose and above his hooves, but the rest of his skin is dark under the white hairs. It would be very interesting to see his baby pictures.

The woman with Blanco at Equine Affaire is Cynthia Royal, who, I guess, purchased Blanco when he went on sale in 2006. I did a Google(R) search and found reference to an asking price of $40,000. Not bad for an animal which some sites describe as an Andalusian/Thoroughbred cross rather than a purebred Andalusian.

Demero, the other horse which portrayed Shadowfax, died of melanoma in 2003. Many gray horses develop melanoma at an early age because their color gives them less protection against the sun, I think. Many times the tumors can be removed, but the owner of a gray has to be alert to the danger.

Cynthia Royal is planning to use Blanco in a Las Vegas show featuring at liberty horses. Here is a link to a video of her with Blanco. This falls into the "don't try this at home" category. Working barefoot with horses is a DUMB IDEA. One of my trainers lost her toe when she was a kid because her horse stepped on it while she was washing him/her down. So it's a better idea to wear proper shoes unless you want to have a rude awakening from your fantasy ride. I'd also add that you shouldn't be on a horse without a helmet (I wouldn't dream of it), but I understand that a helmet also gets in the way of a fantasy. Some people don't value their brain as much as I do.

A few years ago, a show called Cavalia came to L.A. It featured a lot of big gray horses, a lot of liberty work and it was just magical. I was lucky enough to get a back-stage tour with other people from Pierce College when Ron Weschler, the professor in charge of the equine program, made the arrangements. It was up close and personal with a lot of really well behaved and pampered stallions--virgins, said our tour guide. They don't travel with mares, which makes things easier. It's not a cheap evening, but I can't recommend it enough if it's in your neighborhood. Here's a link to Cavalia.

I'm most impressed with the fact that Blanco can be left standing by himself and he will stay. In a couple of the photographs below, you can see that he's not tethered. I probably wouldn't do this with my horse in a trafficked area, but Blanco handled it very well. I think they did a great job of desensitizing him on LOTR. 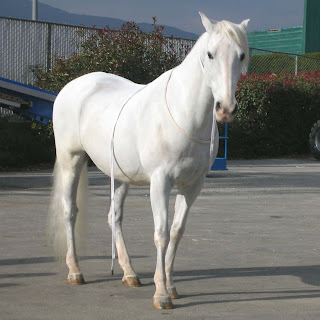 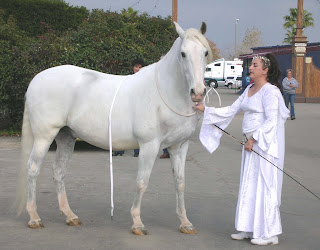 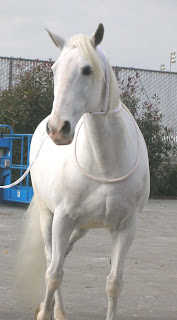 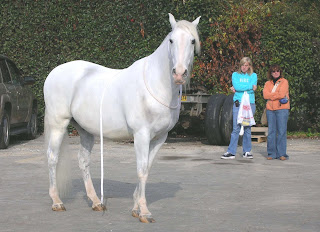 Oh, thank you! It is so nice to see these big guys looking handsome and loved.

Let's just say I have an interest in seeing how well beautiful boys age.

Loved they definitely are, Sage. Blanco was described as "a bit of a porker" and his trainer didn't try to make him do more than one rear because it is quite strenuous. Bey Cedar can bow, but his trainer didn't make him do a full bow because the mats are really too hard a surface on the horse's knees. Both of the horses like their treats as a reward, but Bey Cedar also wanted applause from the audience. The audience complied.

My sister and I went to the CanAm Horse Show in London, Ontario on Friday for the day. We always enjoy the extravaganza at night but it was a bonus to see Blanco there performing. I am a photographer also and managed to get some decent shots of him from the nosebleed section ;o)Do you know for sur if he is part thoroughbred? I thought he was all Andalusian. I will be posting some pics to my blog tonight and have some on my flickr site as well.