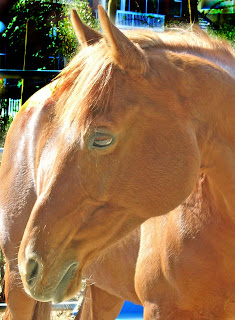 Every day is improved with a visit to my horse. He's always glad to see me and I can hear him nickering as soon as I get out of my car. He is definitely the best birthday present I ever got, even if I had to buy him for myself. It is never too late to have a happy childhood.

Ace will be 11 years old on Sunday (I just saw somewhere that was also the great Secretariat's birthday--almost 30 years earlier.) He was born with Comet Hale-Bopp in the sky and and a matching one on his forehead. Hence his registered name, Auspicious Comet. Ace comes from the initials A.C., not shorthand for the drug. I heard about his birth shortly after he arrived. He wasn't the bay mare my friend Melinda hoped for (Ace's sister Phaedra would fulfill that wish exactly two years to the day later) but he turned out to have good confirmation and a great personality. Everybody loved Ace, the horse who would rather hang around people than eat.

At the time he was born, there wasn't the slightest clue that he'd eventually come to own me. I hadn't been on a horse in over 20 years, I'd never taken lessons to ride, and I had never spent that much time around them. My grandfather never delivered on his many promises to buy my sister and me a pony (and not just because my mother wouldn't have allowed it, I'm sure.)

I got regular updates about this beautiful colt from Melinda every time we spoke. When he was a year old, I took a trip out to New Mexico for the Nebula (R) Awards Ceremony and stayed at Melinda's for a few days. In retrospect, it was probably love at first sight, even if he did try to take a chunk out of my shirt and shoulder when Melinda and I weren't paying enough attention to him out in the barn one day. I've never seen anyone react faster than Melinda did in disciplining him--he never knew what hit him and he's never tried that again.

I signed up for riding lessons that fall, but I had to put if off for a year when I broke a bone in my foot walking to my car. That's why you should be careful of cracks in the sidewalk. Len and I had originally talked about taking lessons together, but just before we were to start, he wound up in the hospital and I haven't been able to convince him to give it a try. His reaction is that he likes to know where he is on the food chain and is of the conviction that the horse is higher. I think that may be a self-fulfilling prophesy.

When Ace went under saddle sometime after his third birthday, Melinda and I started joking about me owning him someday. I think at the time she expected to campaign him as she had his mother, a lovely mare with an imperial bearing named Flames Sirocco, called Rocky or sometimes the Ayatolla of Rock 'n' Rolla for her temper. (Her sire, Bask Flame, seems to have had a reputation for that kind of hot-headedness. Ace's sire, Padron's Mahogany, apparently throws his own famous sire's much more mellow personality.) As it happened, Melinda was moving on to warmbloods to compete at higher levels of dressage where Arabians are not favored in the ring and she had finally gotten a bay mare out of Rocky's second breeding to Mahogany. Our conversations about where the gelding would end up became a little more pointed.

I paid a visit to New Mexico again in the spring of 2001 to see how Ace and I got along. At four, he was really too young a horse for as inexperienced a rider as I was, but we definitely bonded. I gave Melinda a down payment and came home to find a place for him to live.

My husband was totally against the idea of horse ownership, but I think Marv Wolfman said to him, "if she can afford the horse out of her own money, what's your problem?" I was in the middle of a big case for Harlan Ellison, and Ace is often referred to as "the pony that Uncle Harlan bought." I had to go to New Mexico to take depositions on the case at the end of June, whereupon we concluded the sale and Ace got on a transport the day after I flew home. He arrived the next day, unhappy about losing his family but glad to see a face he recognized when he looked out the door of the transport. He managed to gouge his flank in his panic to get off the bus.

It took a while for him to get used to the idea of being where he didn't know anyone. He kept calling out for voices that never answered. (When Melinda's Hanovarian Steppe arrived at Pierce for a brief stay about three years later, the two geldings were undeniably excited to see each other--it was a family reunion for them.) I've noticed that he's never become a "Siamese twin" with another horse, but he seems to get along with most other horses pretty well. The only other time he's had a difficult transition to a move was when we left Pierce--he settled down when two of his barn mates showed up a few days later. But the two moves since then have been uneventful. He seems to be just fine as long as I'm attentive--and I'm very attentive. He likes to flirt with other women, like my trainer Gayle or her assistant Ashley or Gina who does the evening feeding at the barn. Even Zsuzsu, who owned Ace's turnout buddy Otero at our last barn, fell for his charms and felt that she had to treat him with lots of carrots whenever she gave them to her own horses (I did reciprocate and Ace would be annoyed--it was as if he knew those could be his carrots.) He is definitely a woman's horse, but I will say that he's got plenty of respect for Harry Whitney, who has schooled him on several occasions.

I've had several people say to me that Ace is a "once in a lifetime horse" and I have to agree. He's all personality and art in motion when he moves. My friend Teddy noticed he bears a striking resemblance to the George Stubbs painting of Whistlejacket, the grandson of "The King of the Wind" Godolphin Arabian, although Ace has more chrome. Even other horses stop to watch him in action, as if they too know he is something special. 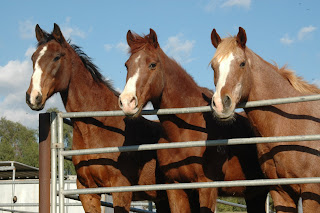 What a lovely story on how you came to own Ace. He does seem like a once in a lifetime horse and I'm sure you were both meant to be together. He is stunning and I loved to hear about his ladykiller personality. These guys will do anything to get what they want from the ladies, even if it is only carrots.

Ace is one handsome lad. That's a beautiful story of how he came into your life. He sounds like a prince!
Harmony,
Janet