My excitement of having three and a half lovely days to spend quality time with Ace and three lessons on him was severely dampened when I arrived at the barn on Friday afternoon. There I discovered a skip-loader racing through the arena depositing loads of DG into the run areas of the first three stalls and various workers using compacting devices, drills, hammers, and other implements of noise and destruction (or construction, depending on your point of view.) Needless to say, there were 10 horses in various stages of distress over the disruptions.

Let me make it perfectly clear. I don't object to the work being done--the stalls needed 12" of DG, not 2" over a foot or more of sand and I am surely happy to have a tack room almost outside of my stall door--I'd just like to know when things are going to happen so I can make plans accordingly. Communication seems to be lacking in most people who run barns but don't actually own horses. I had moved up my lesson to the afternoon and Gayle couldn't change it back to after 5 when I discovered the mess. What was more, there is no way this will take less than a week to finish. Horses have to be swapped out of their stalls and there needs to be a bit of time for the DG to set before they can be returned. They are working from early morning until about 5 p.m. and they left the skip loader in the arena on Sunday, making a turnout unsafe.

Gayle came at 3 on Friday and longed Ace during what should have been our riding time. It was good for him to concentrate on work with the havoc at the other end of the arena. He's doing much better about carrying himself and keeping the side-reins loose instead of leaning into them. Since we couldn't do our 11:15 on Saturday morning, I got to the barn, tacked Ace up, and walked the half mile over to Family Equestrian Connection's base barn to take my lesson in that arena. Gayle wasn't certain I'd be able to ride, since Ace hasn't spent a lot of time there and the distractions include a lot of noise and visual distractions. Plus there's the matter of walking under the overhang where the hay is through a small gate and past the goats. We did fine until I opened the gate and a truck spun out across the street in an attempt to pull a tree out by its roots. Ace nearly ran me down--something he's never done. Gayle came out and schooled him through the gate one step at a time, three times in a row. He left with no problem after the lesson. In the arena, we did just fine and then I let Ashley, Gayle's young assistant, take Ace for a real spin. He was tired when we walked home. 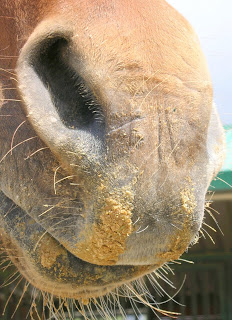 Sunday was the boy's birthday. If the skip-loader hadn't been in the arena, he would have had a nice turnout. No such luck. But I did bring him a special bran mash, for which he was greatly appreciative, as you can see. For a fastidiously clean horse, he sometimes lets his enjoyment get the best of him. He wouldn't listen when I suggested he take a drink to soften the crust left on his nose.

About the time he finished his snack, Patricia from RiverBottom Belles showed up to do a bio-scan on him. I am not entirely sure what goes on with the blinking lights and all--I'm cynical enough to call it California woo-woo medicine--but he really relaxes during the treatment and it doesn't cost all that much the few times a year I've been doing it. I'm told it helps in healing and maybe it is related to the things I got hooked up to when I was recovering from my broken arm. I just figure there's no harm done and he doesn't object to standing there with a silly horsie kippah and someone running a scan all over his body. It takes about 45 minutes and he's very cooperative. 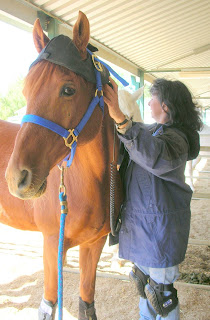 His next door neighbor, Sebastian the Thoroughbred, has turned out to be a real thug. On Saturday, Sebastian took a piece out of Ace's dock and on Sunday he tore a big scrape across Ace's throat. It will all grow back, but Sebastian's got almost 2 hands over Ace, a boarding house reach, and is being fed 6 flakes of alfalfa a day by an owner who makes it to the barn maybe twice a week. He's got a lot of pent-up energy and Ace won't back down.

Instead of spending Monday with the boy, I worked on tax stuff and went to the barn for a lesson at my usual time of 5:15. Ace had been moved to the far stall since his was next to the one being dug up for resurfacing. It made it extremely inconvenient to get him tacked up and he's only got partial shelter if we get the promised rain tomorrow. He was also very twitchy. Why they couldn't bother to move his manger instead of feeding him on the sand, I have no idea. I moved it myself. They also didn't do anything to close off the feeder window into the actual stall, which is used for hay and feed storage. He could easily stick his nose in and tear open a bag of pellets or otherwise get into trouble. I went and moved that stuff as well. At least they did provide water buckets and fill them.

Because the construction was done for the day and the skip-loader was no longer in the arena, we were able to take our lesson. Unfortunately, we had to be really careful because the arena hasn't been dragged in weeks and no requests to do it have been honored. The area where the skip has been driving was more even than the rest of the arena, so that's what we used. It was an altogether terrific lesson with much progress being made.

I finished the day by ordering too much $1 sushi when I met my husband at Samsala. It's amazing how a special can wind up costing far more than the regular combo.
Posted by M. C. Valada at 9:35 AM

Wow, that's a lot of action at the barn for any horse to get used to. It is too bad he has a bully for a stable mate though, I hope they work it out. I really just want to wish Ace a belated birthday, and I see by his nose that he loved his birthday dinner.

Rod Bergen likes to point out in his bomb-proving clinics that there are certain things that no horse should "have to get used to" but proximity can make a difference.

Thank you for your birthday wishes.

Happy belated birthday to Ace! You know that I'm going to tell you to make a fuss about Sebastian. They can move him to another stall next to a mare. It's not something Ace should "have to get used to". Once Siete had a pasture-mate who beat her up and I insisted that they separate her from the attacking horse. You're always Ace's best defender, and it sounds like he needs some help. Too bad Sebastian's owner isn't as knowledgeable and caring as you are.

Sadly, Sebastian's owner passes herself off as a "trainer" and asked me if she knew of anyone who needed horses exercised because she needed to earn some money.

We only have one mare at the barn, but I'm sure she could take on the much larger Sebastian. The girl who owns the horse on the other side of Sebastian has also reported the problems, so we may see him moved now that there are stalls available.

Sebastian now has wraps on his two hind legs because the owner said he cast himself. I think he got hurt trying to kick his heels up at his neighbors, which I've watched him do. Did I mention he managed to dig a hole straight through the new dg in his stall? They've already had to redo it.

I'd sure hate to pay for his shoes which must be worn down to sharp edges from his didgging.