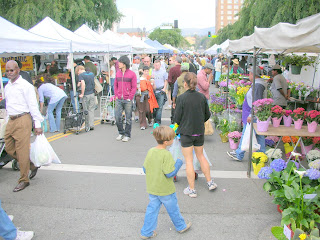 Another long week at the office is almost over and I am looking forward to two riding lessons on Ace (if the strong winds in the forecast don't materialize) and some quality time with my husband. We used to spend many Sundays wandering through the various flea markets in the Los Angeles area, but since I bought Ace, I can't afford to indulge in that very often. In the days when Bristol Farms had a store in our general neighborhood, we used to go for samples and to look at the beautiful packaging. Our current Sunday "religious" experience still involves food--often a trip to the Hollywood Farmers' Market.

Located a block west of Vine and for two long blocks south of Hollywood Boulevard, it is one of the largest farmers markets I've been to out here. We can find at least one every day of the week, and there are two others closer to our home that we go to when there's not enough time to go over the hill on a Sunday morning. In Los Angeles, you can never tell who might also be out shopping. I had a nice conversation with David Selby (from Dark Shadows--the original--and Falcon Crest) at the Studio City market one Sunday. A few months ago, Nancy Silverton of the La Brea Bakery and Mozza was signing cookbooks at the Hollywood market. I've made almost every recipe in her bread book, including sour dough starter from the grapes I grow in my potager. 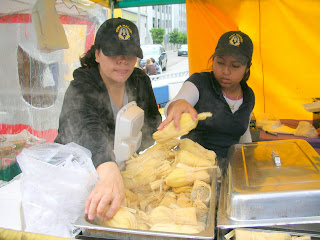 We generally start the event by finding breakfast, and, as far as I'm concerned, there is no better street food than the Green and Sweet Yellow Corn Tamales from Corn Maiden. Unlike the otherwise excellent sweet corn tamales from El Cholo or El Coyote restaurants, Corn Maiden's are not stuffed with cheese, an unnecessary ingredient. I like the mild tomatillo salsa on them, but I could just eat them plain. Corn Maiden does have an on-line store to order the tamales for frozen shipping (and they have many with sweet or savory fillings), but I just love being able to indulge in one hot out of the steamers as I peruse the other kiosks. The price has jumped from $2.25 to $3.50, due, no doubt to the rise in corn prices, but they are worth every penny. 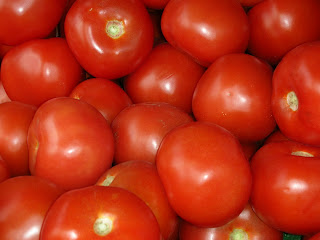 Once Len has found a more substantial breakfast--last week he tried the bacon and egg quesadilla at another stand--we can go off looking for vegetables, fruits, cheese, nuts, and plants. Last week, there were lovely tomatoes, both the traditional red ones and heirlooms in a variety of colors, including the "black" tomatoes I'm showing here and big baroque shaped orange and yellow ones. 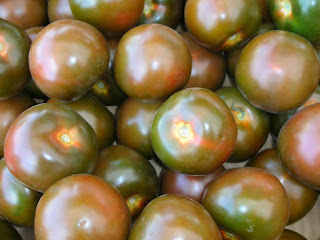 In the category of unexpected surprises, there was someone selling organic non-alcoholic margarita mixes. After tasting, we purchased the very tart meyer lemon and somewhat less tart pomegranate varieties. We haven't had a reason to try them with tequila yet--we don't drink that much and it's likely we'll have the unopened bottles around for months.

There are several stands dealing in artisan cheeses. I'm partial to the goat or sheep milk varieties and there's a dealer who has an outstanding--really outstanding--aged gouda, which we will sometimes purchase and not share with our friends. I love it with a good apple. At the Encino Farmers' Market, a dealer who has a wide range of artisan cheeses is trying to open a store in the same building where I used to have my law office along Ventura Boulevard. It's a real good thing that I'm no longer renting space on the second floor, but we keep driving by to see if they've gotten it open. Sadly, not yet. 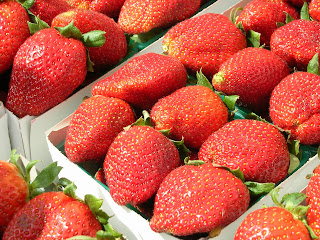 What looked really good at last week's market were the strawberries. I got a three basket container for $3.00 from this dealer and took them home to serve for dessert at the weekly dinner and television night we're doing while we wait for the return of the Amazing Race.

The strawberries were wonderful with a warm, almost flourless, chocolate cake from Trader Joe's and French vanilla ice cream eaten while we watched the latest installment of the HBO biography of John Adams. Was anyone else creeped out by the scene with John and Abigail tearing each others clothes off when they were reunited in Paris? It was rather like watching your parents having sex--one of those things you'd rather really deny ever happened. I said "eyweuh" out loud, and our friend Becky immediately agreed that it was something she didn't need to see.