It Wasn't for Want of a Nail 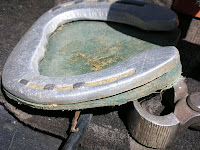 I got to the barn to take my lesson on Monday and had gotten Ace all cleaned up except for his feet. I did his off-side first, since that was more convenient and then I went to his near side. I picked up his foot and my first thought was "what the hell has he done here" before I realized I wasn't looking at his back foot, but the front one which should have had a shoe and pad on. Then I really had a knot in my stomach.

He still had a couple of nails in the hoof wall and a chunk of hoof taken off the inside. At first I was afraid that I had missed him throwing a shoe when he was turned out on Sunday night, but then I found the shoe in his stall. When Gayle got there with some tools a few minutes later, we realized he must have caught the hoof in the rail to his neighbor and yanked. I'm really lucky he didn't do more damage, since the shoe hadn't been loose in any way and the other one was solidly in place. I also felt really lucky when I reached my farrier and discovered that he had just gotten back from Colorado, so he could come out on Tuesday morning to reshoe my boy. Since I had expected Tim to come out on Saturday or Sunday anyway, it only pushed up this month's shoes by a few days.

Tim is the second farrier I've had for Ace since I got him seven years ago. My original farrier, Mike, was great, but he got pissed off when the barn manager at the college threw one too many arbitrary rules at him. It went from me scheuling Mike's next visit at the beginning of the shoeing session to him telling me that he wouldn't be coming back again as he packed up his things.

It can be really hard to find a farrier. Horse owners don't want to share names, it seems, and out here farriers can pretty much pick and choose their clients. I think I'm a pretty good client: I'm there when feet are done, I've always got my checkbook, and the checks don't bounce.

Fortunately, about six months before Mike quit on me, What's My Line Live on Stage had a farrier as a contestant (the panel didn't guess his occupation.) So I got in touch with director Jim Newman and asked for contact information. The farrier had stuck in my mind because he identified himself as being from Binghamton, not far from where I'm from. It has turned out to be a really good match.

Tim was trained at Cornell University and is a big believer in keeping horses barefoot whenever possible. We did it with Ace for almost a year until he got another nasty bruise on that problem left front hoof with almost no heel. The vet insisted that shoes were in order, pads were up to Tim. So, we've gone to shoes with pads in front (he's always been barefoot on his back feet) and we haven't had a bruise since.

A horse is his feet, and I don't mind paying for the pedicure that keeps Ace in good shape. Thanks, Tim. I'll be lost if your acting career takes off. 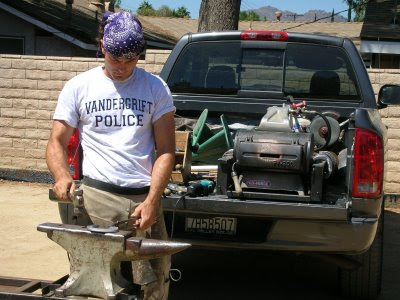