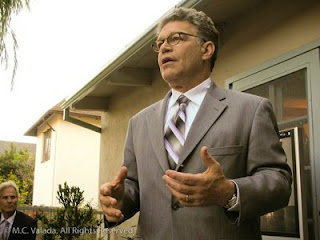 Like most people, I'm looking forward to the train wreck which is coming up in the form of the Vice-presidential Debates. It won't be quite as much fun as the one I went to for the first Presidential Debate. In the photograph above, comedian and political commentator Al Franken, candidate for the U.S. Senate from Minnesota, addresses the crowd at a back-yard fundraiser in Los Angeles last Friday night. I saw several people I recognized and even a few that I know, like screen writer Josh Olson (A History of Violence.) Al was planning to do commentary during commercials, except there were no commercials. He did have some remarks at the end, before running off to House of Blues where Dan Ackroyd was having a big-ticket benefit for the campaign.

If you look closely at the photograph below, you can see SNL alum Laraine Newman next to the man watching television. Julia Sweeney was also in attendance. That's Al Franken sitting at my feet watching Jim Leher on the television. At one point, Mr. Leher was absolutely struck dumb by something that John McCain said. I wish I could remember what it was. I have fond memories of photographing Jim Leher in my studio in Virginia for an ad campaign more than 23 years ago. He was very nice, and gave me a lot more than the 10 minutes I was told I would have with him. I'm hoping the moderator on Thursday night asks Sarah Palin about Adam and Eve riding dinosaurs in the Garden of Eden.

While a number of the people at the fund raiser were disappointed that Barack Obama didn't lay into McCain and were very unhappy that he kept acknowledging points where he agreed with McCain, the polls indicate it was a winning strategy. Obama looked presidential and McCain looked rude and angry. It was as if McCain mentally pictured Obama as the enemy, wouldn't look at him, wouldn't acknowledge him, in order to eviserate him. No wonder no one has nominated him for Mr. Congeniality.
Posted by M. C. Valada at 2:20 PM

I'm looking forward to the debate tonight. It will be interesting to see just how much Palin has been coached and if she really believes humans were riding dinosaurs.

She certainly believes in witchcraft. Why else did she need blessings to protect herself from it?