My friend Gillian held her annual pumpkin-carving party this afternoon. With the temperatures as high as they've been this week, it is unlikely that the pumpkins will make it to Sunday unless they are refrigerated. 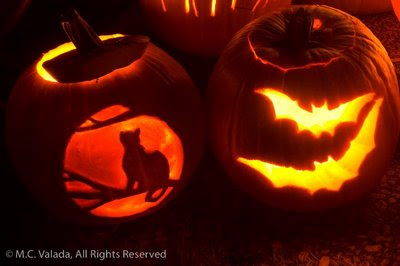 As you can see, we've got some talented carvers in the group. Lisa Klink did the cat on the left, a bas relief which left a layer of pumpkin to diffuse the light of the candle. Craig Miller did the nice bats on the right. 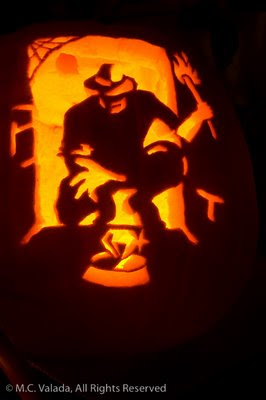 Indiana Jones, done by Nicole Dubuc, was one one of the most complex carvings of the day, although the portrait of Darth Vader you can see in the center of the bottom row in the group photograph was also impressive. 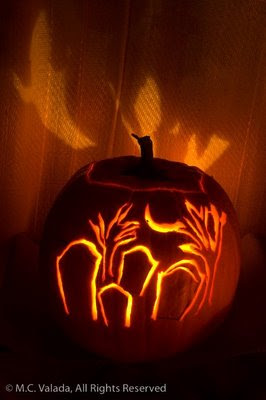 In past years, more people have done double-sided carvings like this graveyard with ghosts projecting from the back of the pumpkin that Genny Dazzo made. This may have been the only pumpkin with projecting images this year.

Three of us got into the spirit of the election by using the patterns from www.yeswecarve.com to produce pumpkins with the Obama for President logo. It was a great idea, and, as Gillian said, we won't have any problem identifying what year the carvings were done. 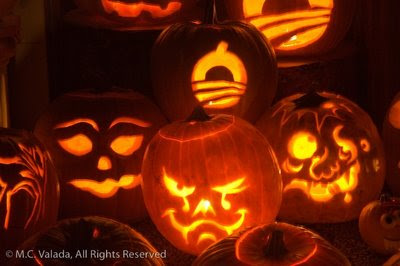 The pumpkin in the center on the bottom row of this last photograph was an original design by my husband, Len Wein. He likes designing his own and does a great job with it. In past years, he's created a Swamp Thing and a Batman.
Posted by M. C. Valada at 1:00 AM

Those pumpkin carvings are great. There sure are a lot of talented people doing the carving. I can't even imagine all the work that goes into this.

Thanks, Arlene. It is one fun afternoon. The trash bag with the pumpkin guts weighed about 100 pounds when we were done. I admire people like my husband who do their own designs, but I can say from experience that the ones following a pattern have a lot of work to do as well.

I'm impressed! It's amazing what talented people can carve into a pumpkin- Len's is great! Yours is great too - I don't think I could do that - I'm pumpkin challenged, even though I've done it for years with my daughter and her friends.

Thanks, Victoria. Our collection of pumpkins got published on www.yeswecarve.com yesterday. The featured pumpkin of the day was a phenomenal bas relief of Barack Obama's head, of such detail that the hairs on his head were there. Unbelievable.