People Magazine Finally Gets It Right 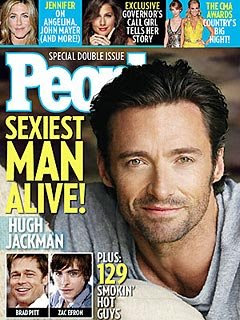 It has taken 7 years, but People Magazine has finally named Hugh Jackman the Sexiest Man Alive. As far as I'm concerned, all it took was a shot of Wolverine's bare back in the fight cage of the first X-men film and I understood the "drool buckets" the women who camped out in line had brought along. He is, I can say from giddy experience, even better looking in person. That he is incredibly gracious and kind makes him even more attractive.

While Hugh has been an also-ran for the title for a number of years (starting just after X-men), losing out to boys like Brad Pitt, it's nice to see a real man get the award. Why is it there are so few American actors under the age of 40 who come across as men, rather than boys?

We'll be at a screening of Australia tomorrow night. Could Hugh be looking at an Oscar(R) to add to his Tony(R) and Emmy(R) Awards? I will let you know what I think later this week.
Posted by M. C. Valada at 1:02 PM

He is pretty easy on the eyes. Oh, and a good actor too.

Love your contrast between boys and men! So utterly true.

Don't let the critics put you off from seeing the film. We really enjoyed it.