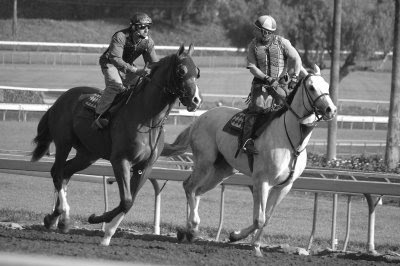 When I was taking classes in the horse program with Ron Weschler at Pierce College we got a yearly class trip to Santa Anita race track and a tour of the private areas where horses are trained and housed. One of Ron's best friends (and team mates on the rodeo team) from his own days as a student at Pierce is a top trainer there, which is how we came to have the privilege.

We would meet at 6:30 a.m. at Clockers' Corner, which meant being in a car no later than about 5:30 on a Saturday morning in the spring in order to get to the race track, park, and hike to the entrance. Frequently, there would still be fog hugging the ground, and watching the horses materialize out of it as they took to the track was almost magical.

One time, I turned around and realized that Gary Stephens was standing just a few feet away. Another time, Bob Bafford came over to talk to our group. The photograph above was made in 2005, soon after I got my digital SLR. When I find the original, which is in color, I'll replace it. I never stayed for the actual races, but I really enjoyed watching the horses practice. Santa Anita is a beautiful park and the San Gabriel mountains are its natural backdrop.

I bring this all up because Animal Planet just ran a series called Jockeys which was shot during the Oak Tree session at Santa Anita last fall. I think it just finished running, but I'll bet it goes into repeats. A friend mentioned it to me and I managed to catch a few back-to-back episodes last Sunday and then I saw what appear to be the final episodes on Friday night. As far as reality shows go, it was really good. Of course, it has horses, which most of them lack. I don't know if there will be another season, but there should be.

There were about six jockeys that they spent most of their time on: two women and four men. But other jockeys, like the afore mentioned Mr. Stephens, and trainers like Mr. Bafford make appearances. So did Cigar, who failed to win a $3 million purse at the stakes. I did shout a lot while watching it--it is hard to watch things like horses rearing in the gate sending a jockey flying to the dirt--but the relationships were interesting and the number of different horses a jockey rides in a career is staggering. I do recommend it.

My friend Neil Gaiman, about whom I wrote recently, will be the guest on The Colbert Report tonight. Stephen Colbert is a comic book and science fiction geek, so I'm sure it will be a good show. I became a fan of Colbert's the night I saw him speaking Elvish to Conan O'Brien and realized he is nothing like the character he plays on The Colbert Report.
Posted by M. C. Valada at 11:28 AM

Thanks for the heads-up about the
Colbert report and Gaiman. I have managed to miss every episode of jockeys on AP so far, so am hoping for the reruns.

I missed the series on jockey's but hope there will be reruns.

kayla stra gets a couple of mounts weekly how does she survive? been watching her on jockeys feel bad for new jocks even if they are good hard to break in.chantel can get by on looks alone but she can really ride. how can i speak to kayla on line?

Your account of Santa Anita in the early morning hours leaves me hoping I will return for Breeders' Cup 2009. I came all the way from Albany, New York to work as a betting clerk at Breeders' Cup 2008 and it was a fantastic experience. This year I'll plan to arrive at the track by 5:30 AM to witness the magic of the workouts.

You mentioned seeing the trainer, Bob Bafford. You must be referring to Bob BAFFERT.