We're back from San Diego, exhausted, but in a good way. There's little that can top what happened on Thursday and Friday, but Len said that Gerard Way of My Chemical Romance came up to him on Saturday and told Len that the coat he wore to the Eisners was the coolest ever. Imagine a rock star saying that to an old guy of 60. (Gerard Way took home a couple of Eisners on Friday, so he is no stranger to the comics world.)

Tonight I plan to get the digital images processed (if you shoot RAW, you actually do "process" the images) so I can get some pictures up tomorrow. I hear there is video with Len and Hugh Jackman on YouTube, but I haven't found it yet. My friend Kim has gone to New York for a week, so I don't expect to see the pictures of me with Hugh before then, but I do have Len with Hugh. The handshake shot, which I was not in a position to get, was caught in both directions by others and I've seen that all over the Internet. Here's a link to one on Nikki Finke's Deadline Hollywood.

Here's the version of the photograph from the Los Angeles Times by Spencer Weiner, from the opposite direction. That's my hand on the chair and my blond hair behind Len's back. You can see why I wasn't in a good position to take a photograph of the two of them. I did much better back stage. 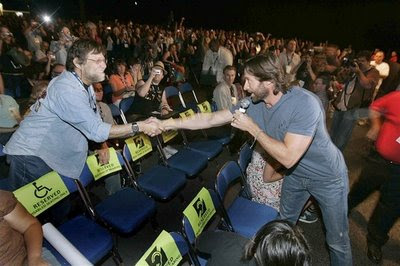 It took us more than two hours to pack out of the hotel on Monday morning. Let me correct that. It took me about half an hour. It took my son two hours. He's the one who did all of the shopping and had a small fortune in anime-related statues to bring home. He also did a great job scavaging the floor for swag--free stuff--and had an amazing number of these monster bags advertising different television shows and movies.

Ace greeted me when I got to the barn last night for my lesson. He was also not eating--there was a mass of hay in the stall. Gayle and I figure he doesn't like the taste of the new batch or he missed me. There was nothing wrong with the hay, so I sprinkled some vinegar over it and he was eating it when I left. My concerns about colic were relieved by the way he took carrots from me and that there was fresh poop around. Plus his gut sounds were just fine.

He looked very nice in his new saddle pad from Mary's Tack and Feed and I'll put the braided reins on his western bridle tonight, so I can move the black ones back to his dressage bridle. Yes, I spent most of my money in San Diego at the tack shop, not the convention or even Nordstrom's.

I did get a nice little statue of Wolverine on a business card or post-it holder base on Sunday, but it's not like the years I ordered the Sideshow statue of Aragorn on Brego charging the Black Gates or the replica of Eowyn's Sword that now hangs in the living room. My biggest shopping regret from past years at the convention is that I couldn't afford the statue of Sam Gamgee with Bill the Pony that Sideshow did the first year they had Lord of the Rings pieces. It almost immediately sold out. What would have cost me $125 goes now for thousands of dollars on eBay. Lesson learned: if you really love it, buy it. The grocery money will show up.
Posted by M. C. Valada at 9:56 AM

You could have knocked me over with a feather -- or powered an Infinite Improbability Drive out of my ass -- when I realized that the Gerard Way accepting his Eisner was the same Gerard Way whose album I'd been listening to in my car on the way to San Diego! I love the fact that he admired Len's rockstar coat!

You, Gillian, are much more savvy than I. Of course, you are also a lot younger. For me, the music died in 1997, so I would have no idea who these young performers are without the assistance of Wikipedia. Gerard Way was a cutie, I must say, and I love the fact that he loved Len's coat.

Of course you spent the most money at Mary's Tack & Feed - I would too - it's my favorite store in the whole world! I"m glad you had fun in SD.

I'm sure Ace missed you, but was happy with his new saddle pad and will like his new reins.
Glad to hear you had a great time on your trip but you are probably glad to be back home.

Victoria: I like Mary's for a number of things and they have a fabulous sale in February, but I also like Broken Horn very much and it is enormous. Mary's actually seems to have more stuff for Arabs. I almost bought a dressage bridle for a pony because I thought the nose band would actually be small enough for my boy. I just couldn't bring myself to spend the $225 right now.