I'm not sure I get the joy of horse shows. Long dusty days waiting for a few minutes in the ring and not having the slightest clue what the judges are looking for I'm just not that competitive (unless playing Jeopardy or Trivial Pursuit) and I've seen a bit of an attitude that's hard to take. Nevertheless, I went off to photograph the kids from my trainer's program at a schooling show on Sunday.

I enjoy the opportunity to practice action shooting. I didn't have as long a lens as I would have liked, but I still got some good photographs: 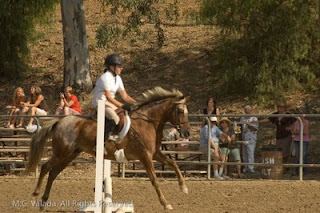 Leann and Charlie didn't have much of a chance against the bigger horses over the jumps, but later wiped their friends off the field in equitation. 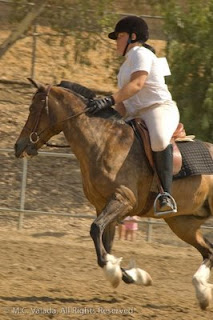 Ashley and Curio won the timed jumping class and wound up as reserve champion for high point of the day. 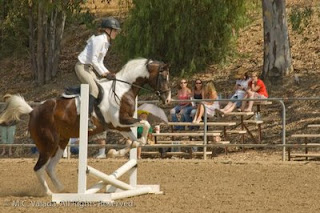 Pebbles had a bit of an issue with an orange cone, but if you point her at a jump she's a very happy half-Arab. Very pretty, too.

The kids had a really good time, which I guess is the most important thing.

I rather thought I couldn't do much worse than some of the competitors, so we might take Ace to a schooling show one of these days. He has a lot more substance than some of the Arabians I saw. Too many of them looked incredibly unhappy at their fate. It was a long day for them, too,
Posted by M. C. Valada at 10:12 PM

I can only say that we showed for years, competing in everything from schooling shows to the "A" circuit shows along the East Coast. Sometimes it was fun, but more times than not it was long grueling days for a few minutes in the ring. My daughter liked to show to put her lessons to the test and see how far she had come and what she needed to improve upon. I just did it for fun, I'm not all that competitive either.But it's always nice to know where you are from where you started.That said, I've had enough and don't know if I will ever feel like getting up at 3-4 a.m. to get to the barn, get the horses and get to the show only to get home at maybe 10 at night. I think I'd just rather enjoy riding at home or the trails.
But why not take Ace into a schooling show just to see how you like it. You've got some nice action shots of the kids and horses.

We'll probably give it a try sometime soon. Maybe as soon as I can feel confident in my English saddle again. Before that, I may have Gayle take him into the ring. It would make my friend Melinda Snodgrass so very happy to see him compete like she did with his mama.