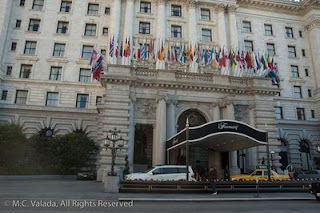 I can never spend enough time in San Francisco. This was our first stay at the Fairmont Hotel and I would love to stay there again. Five days of beautiful weather, and I never saw the outside during daylight. 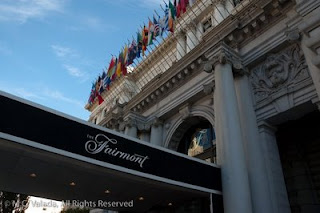 I finally got a look at the hotel in the daylight as we waited for our car to head for home on Tuesday morning. 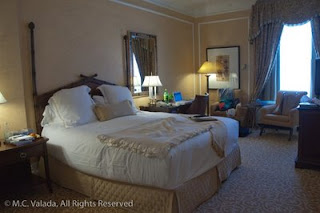 We had a room in the older part of the hotel. I didn't get a chance to see the newer, high-rise section, but that was just fine with me. If I wanted to, I could have used the stairs to the sixth floor or gone down to the mezzanine where we held our meetings. The only thing we missed was Comedy Central on the large, flat-screen HD television (which is just out of view on the dresser at the far right of the shot. 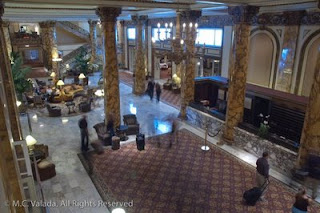 The lobby was quite elegant. Just past the guest check-in desk was the bar where we spent plenty of time talking to the other folks who were at our meeting. We also had the restaurant on the other side of the bar to our selves for our final meal in San Francisco with the rest of our "blue ribbon team." The Laurel Court Restaurant is normally not opened on Monday evenings, but Russell managed to get it opened for our private party of about 16 people. Robert Silverberg chose the wine, and he has excellent taste in wine. 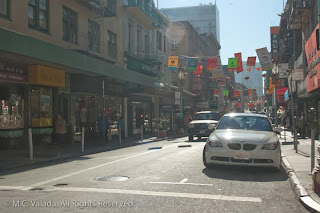 As we headed down Nob Hill to get to the freeway, we drove through Chinatown. Len went shopping there on Monday and brought me back two necklaces, one with the Chinese symbol for horse and the other with a ceramic horse necklace meant for someone who's zodiac symbol is horse, but hey, I don't care. Under the Chinese zodiac, I was born in the year of the rabbit but my sister was born under the sign of the horse.

What I missed photographing, and only because Len was somewhat inarticulate, was one of the signs for Bush Street which had been changed to Obama Street. Len saw it and gestured, but not accurately, yelling "look!" several times. Each was louder than the last, but I couldn't determine to what he was pointing. If he had just said "street sign!" The news media has picked up on this story of vandalism, but the change was so subtle you would never have known there was something changed.

"Talky Tina," our annoying GPS voice, was almost worthless trying to navigate out of the city. But we managed to find our way to the 101 South anyway. (In fairness, she did a pretty good job of getting us to the hotel in the first place, with only one mistake)
Posted by M. C. Valada at 11:15 AM