Friend in the News

Our friend Neil Gaiman won the John Newbery Medal for children's literature on Monday. The book honored is The Graveyard Book, which came out around Halloween last year. It is aimed at a young audience (obviously), but I found it quite enjoyable. The New York Times had a nice interview with Neil in Tuesday morning's edition. He was supposed to appear on the Today Show this morning, but I leave the house by 7:45 and didn't have time to catch it. I'm sure he was charming.

I first met and photographed Neil almost 20 years ago, when he was a rising star in the comic book world for his work on Sandman, a series he did for DC Comics. He resembled a better-looking young John Lennon and that portrait remains a favorite of mine. 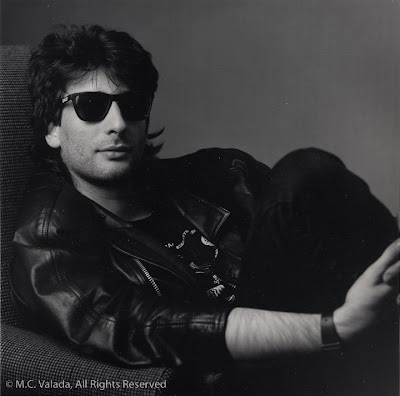 His work is somewhat intertwined with Len's, for the Sandman (a.k.a. Dream, or Morpheus) has as his companion a raven named Matthew. Matthew is the reincarnated Matt Cable, Alec Holland's best friend. Alec is who Swamp Thing was before he became Swamp Thing.

So well-deserved congratulations to Neil (who is off on a press-junket to promote the animated film Coraline, based on his award-winning novella).

His very entertaining blog is listed under "Eclectic Reading" to the right. For grown up readers, I'd like to suggest his award-winning novel American Gods and any of the collections of his Sandman issues, particularly one containing "Ramadan" or "A Midsummer Night's Dream" (for which he won the World Fantasy Award.)
Posted by M. C. Valada at 5:10 PM

I think many of those Newbery winners are great reading no matter what the age level. But then I really love children's books. You wouldn't believe how many of them I own. LOL