Why We Close Gates 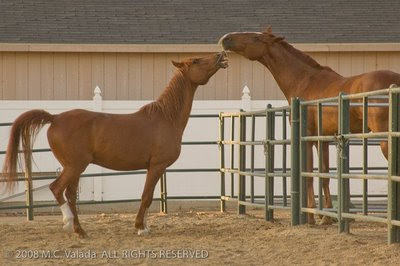 For those of us who are into safety first with our horses, it can be a real annoyance to be with people who just don't get it. I'm trying to get past stupid things people do with their own horses--getting hurt that way is just evolution in action--but when they do things that might have an effect on others, it is still a problem.

I close and lock all gates through which I pass. At most of the places I've had Ace, this is a very important step because most of the places have been too close to roads where drivers aren't driving defensively. This is even in neighborhoods where it is apparent that horses and children on horses are present. It was a safety measure that was an important part of "the Pierce way" of safety.

After a number of months of being at Ace's current barn, I talked to the owner about the problem with people leaving the gate to the tack area open. I offered to buy a sign, but she got one and put it up. We're probably the only people who actually keep that gate closed, but it is important to do so, as one of the other borders learned yesterday. Fortunately, it wasn't as harsh a lesson as it might have been.

I got to the barn around noon. The electronic gate at the street is working again (it was damaged during the big winds we had more than a month ago), so I closed the gate behind me after I drove in and parked. Then I checked the arena gate, which is frequently left unchained by other borders, in case I decided to let Ace out to stretch his legs. After this many days of rain, he's anxious to kick up his heels, but I won't let him out unless there's no standing water and the footing doesn't appear to be too slippery. Across the street, at the first stable he lived in out here, there's a memorial plaque to a horse who broke her leg when turned out into a still-wet arena. I've watched horses slip and slide for a couple of yards in wet arenas. It is not pretty and my heart was in my throat.

I walked to the tack area and opened and closed the gate that lets me in and gives an extra layer of protection when horses are being fed or any other time their stall doors might be open. I decided to let Ace out while I cleaned and changed his water, so he was out in the arena and I didn't hear another border come in.

When I saw her, I noticed she had left the back gate open. Since Ace wasn't in his stall, it wasn't a problem for me. But I did notice she had her horse's stall door open and she was going back and forth between it and the tack room. I said hi, told her I wouldn't be there for much longer, and I'd bring Ace back in after I filled his water, if she wanted to turn her horse out. She said she'd only be there a short time, so, no, it wasn't necessary. I went back to cleaning the stall.

Then I heard a commotion. Ace was running back and forth along the run-side of the arena. I looked out on the run side of the stall and saw a big red horse in the parking lot. The gate to the street was wide open. The horse had slipped out, gone through the open gate on the tack side of the stalls, and was heading for god knows where. Fortunately, his owner managed to chase him to the corner away from the street and got the gate to the street closed. Ace continued to run madly as I saw my son (who had been in our car) walking along the far side of the arena, between the arena and the fence with the house next door. Michael was herding the other horse to the back of the property, where a second fence closed off the tack area. The border and her daughter headed past the door to Ace's stall to meet him from the other direction. They caught him and took him home. As she walked by, I said to her "and that's why we always close all of the gates behind us."

Michael was quite horrified by what could have happened. "Mom, here's all kinds of holes that the horse could have caught his foot in on that side of the arena. And a lot of other things he could have gotten hurt on." The holes are there to accommodate lights for the arena, which I fear will never be installed.

We used to have horses in the barn that could and would open gates, which was another reason to make sure that all gates were locked and chains were secured. Their owner was one of the other people who never closed gates. Unfortunately, the girlfriend and the daughter of our theoretical barn manager are also unwilling to close gates and will go out of their ways to open gates which have been closed for them. It's hard to say anything about that without worry of getting an eviction notice, I'm afraid.
Posted by M. C. Valada at 8:08 AM

Great shots. Nice work. I came across your blog while “blog surfing” using the Next Blog button on the blue Nav Bar located at the top of my blogger.com site. I frequently just travel around looking for other blogs which exist on the Internet, and the various, creative ways in which people express themselves. Thanks for sharing.