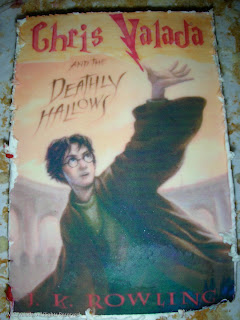 As in, it is never too late to have a happy childhood.

We celebrated my birthday on July 21 with our big summer bash. Said party never happened last year because of various problems with the house, all of which devolved into: it's a filthy mess and we can't possibly get it cleaned up. This year, despite the construction on the kitchen (yes, it is still in progress), I insisted that we hold the party on my birthday because (a) my birthday was on a Saturday and (b) we were actually in town rather than at Comicon. The last time we had this fortunate congruence was five years ago, when we again held the summer party on my birthday.

I planned on writing this up last week, but I didn't have a picture of my birthday cake. I now have a picture of the remains of my cake, which I hope to swap out when my friend L.J. sends one of the unmolested cake.

As you might note, this reproduces the cover of the seventh Harry Potter book with one important change. My name. My husband, who has flashes of genius in this area, redesigned the cover and drew the type-face, a complex process which I can't possibly recall with justice. Suffice it to say, it was a big hit and we haven't been able to force ourselves to cut into the actual image. I'm glad we've got refrigerators these days.

Because my birthday coincided with the release of Book Seven, we carried through with the theme and encouraged those who wished to bring the book and read. A number of people did. Others, like my son who finished it at 4 a.m., were driven to complete the read so no one would spoil the ending. Fortunately, those who had finished didn't reveal anything to those who had not. I managed to get the first five chapters in before I started dealing with the party that day (and finished it at 1:55 a.m. on July 23.)

My friend Emily came in full house-elf regalia, dressed in a pillow case. She won a prize. Many people had Potter-related t-shirts. I wore a quiddich jersey and a reproduction of McMonagall's witch's hat, despite the heat (the hat is velvet.)

We had over 70 people show up, making it one of the largest events we've had so far. There were people who had never been before and those who were regulars. It started around 3 and went to about mid-night, which was pretty early but we are getting too old to stay awake later.

Of all of our collections, it is our collection of friends which brings us the greatest happiness. I got thoughtful presents, but presence was most appreciated.
Posted by M. C. Valada at 10:41 AM