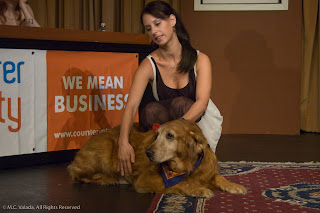 My dog Muffin made her debut on What's My Line Live on Stage on July 22. The logistics of this were a little challenging, because Len was a panelist that night. That was the reason J. Keith van Straaten and Jim Newman were both desperate to have Muffin be the dog worked on by the dog masseuse who was the "demonstration" guest that evening. She did really well, except for almost dragging the hostess on stage. Len was bowled over--and I didn't get a picture of it. I was too worried about Muff to be paying enough attention. 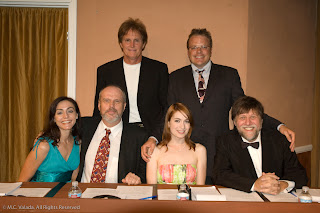 Here's Bruce with the panel and J. Keith on July 22. Len's on the seated row on the right. He broke his glasses just before going on stage. He managed quite well without them. I'd suggest contact lenses, but Len can't deal with the idea of sticking his fingers into his eyes intentionally. I've been wearing them for so long--and wanted them so much--that this was never a problem for me. (I would have a problem if I became an insulin-dependent diabetic who had to give myself shots on a regular basis. Needles. Ugh.) 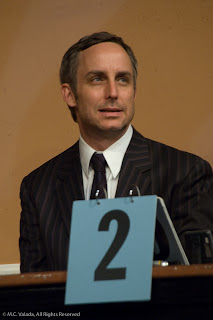 ionally happen on the original television show, but this is the first time I've seen our stage version have two Mystery Guests. The surprise first Mystery Guest was Wallace Langham of CSI. Len, who is a huge fan of the show, identified him. Len got to visit the set for the last day of the past season's shooting, but did not meet Wally that day. Wally's invited him back for another visit, which I am certain Len will be happy to do.
Posted by M. C. Valada at 9:02 AM