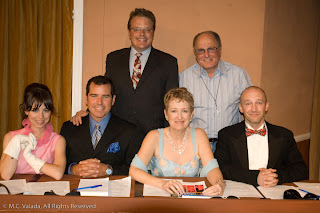 It was another rollicking night at What's My Line Live on Stage at the Acme Theatre last night. In the first photograph you can see Host J. Keith van Straaten with Mystery Guest Budd Friedman, founder of The Improv, standing behind panelists Natasha Leggero, Graham Elwood, Kitty Felde, and J. P. Manoux. The fact that three of the panelist do stand-up (all except the lovely Kitty Felde, known for her radio work) contributed to them actually guessing the Mystery Guest on pretty short order. 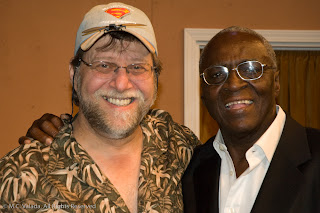 The "Mr. X" guest turned out to be a huge hit with the audience and with the panel: major league baseball's "Sweet Lou" Johnson. Everyone wanted to be photographed with him, so he's in the second photograph with my husband Len Wein. Lou spoke of playing with the Kansas City Monarchs before making it to the big leagues and promoted the Negro League Baseball Museum in Kansas City, which Len had visited on one of his recent appearances at a convention in that part of the country. Lou now works for the Los Angeles Dodgers organization (he played for them in the 1960s) and his line of work for the show was "Teaches Baseball." 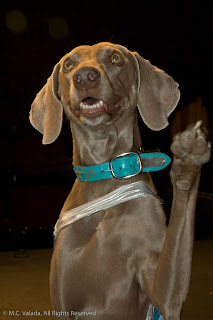 I have clearly developed a soft spot for the animal guests on the show. The Weimeraner is a stunt dog named Chalcy, trained by Kyra Sundance. Her trick was "reading" the numbers on cloth blocks. I'm pretty sure I know how she did her trick, but that's o.k. She was very entertaining, and extremely photogenic (just check out any book by William Wegman who has made a great career out of photographing these extremely expressive dogs.) After the show, Chalcy waved good-bye to the camera for my benefit.

What's My Line has extended its run until the end of the month. Rumor has it that there will be a particularly cool Mystery Guest on July 15 and Len will be on the panel again on July 22. We'll be in San Diego for Comicon and will probably not be there for the show on July 29, so I'm hoping it extends through August. I'd hate to miss the last show.
Posted by M. C. Valada at 12:28 PM