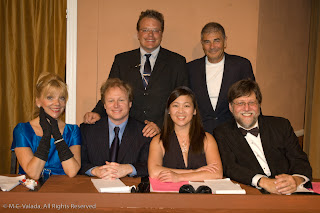 Sunday night's edition of What's My Line Live on Stage had a couple of unmasked celebrities as guests in addition to the appearance of Oscar nominee Robert Forster as Mystery Guest. The panelists this week were Teresa Ganzel, Jeopardy champ Bob Harris, Suzy Nakamura, and my darling husband, Len Wein, shown in the first photograph with host J. Keith van Straaten and Mr. Forster.

The other guests were Mallory Hood, aka Mallory Lewis, daughter of Shari Lewis; Dorian Harewood, not there as an actor, but there as a Blackjack expert; and a nice young woman named Rachael Newman, who washes birds which have been in oil-spills. They are all shown in the second photograph, along with Lamb Chop, Mr. Forster, J. Keith, and a duck.

After stumping the panel, Mallory performed with Lamb Chop, the puppet made famous by her mother. My childhood memories do not include Lamb Chop being a political commentator, but I understand Mallory does adult shows and children's shows with her now. We got a sample of the adult show. The third photograph is of Mallory and Lamb Chop singing a duet of "Anything You Can Do, I Can Do Better," from, I think, Annie Get Your Gun. Isn't Mallory wearing a great dress and a fabulous pair of red shoes? 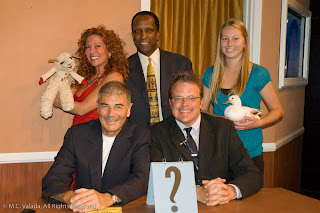 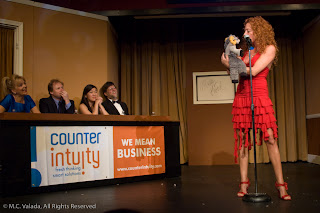 Much to our delight, Bob Harris joined us for the after-show gathering and it was like meeting a life-long friend.

I've been a Jeopardy addict since the show began in the 1960s and watching it is a religious ritual in our house. I tried out for the show around 1972, when it was still in New York, and I tried out again about 10 years ago. Last year, I passed the first on-line screening they did and went in for the live retest. I missed out on an opportunity to actually be on the show because, when they called, a friend of mine was working on effects for Spider-Man, a Sony production, and Sony owns the company that produces Jeopardy. Sniff. Len's too much of a coward to actually try out. He's convinced the board will be things like "Left Handed Nuns' Shoe Sizes" and "The History of Lint" if he actually makes it to the show. We're both really good in the living room, but I've got to say that getting the timing on the signaling device is really tough.

I doubt we have missed a single episode of Jeopardy in the entire time we've been married. When we were dating, while I was in law school in Cleveland, I relayed an entire episode by telephone to Len, who was sitting at LAX waiting to go to London. I think he was paying for the call, but I don't remember for sure.

In any case, Bob Harris is definitely a kindred spirit and we look forward to including him in our circle of friends. We certainly enjoyed his appearances on Jeopardy and he has done commentaries on KNX, the radio station we usually listen to in the car. He's also been a writer on CSI and he's written a number of books. You can check out his website here.

It will be back to the show again on Sunday. For more information check out the website here.
Posted by M. C. Valada at 2:52 PM