Out of the Kitchen and into the Back Yard 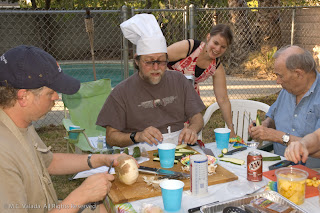 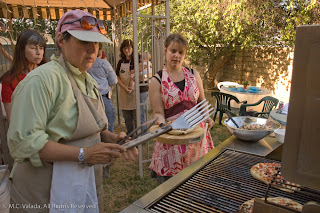 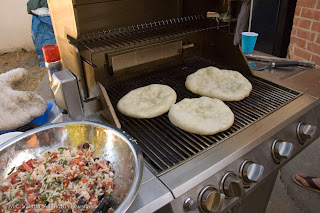 My husband's birthday was last week, so I tried to come up with something different to celebrate. I had sent Len and my son off to a cooking lesson--actually, a knife-skills lesson--earlier this year and they both had a great time. Since Len enjoys cooking but isn't the most adventurous eater and would probably not sign up for a class on his own, it seemed like a good idea to hire someone to come to the house and lead a cooking lesson. To keep things manageable, I was only able to invite eight other people, so I hope our left-out friends aren't too offended.

I asked Tory Davis if she'd be willing to do the cooking lesson at my house. We met Tory at a party a few months back and I've been enjoying her food blog since then (it's linked in the list on the right side of the page.) Tory writes for Bon Appetite, teaches cooking classes, and works as a kitchen coach. She's wearing the red and pink apron in the pictures.

The theme we went with was "You Can Grill That?" since all men like to cook outdoors. She put together a great menu, which included grilling pizza, salad, fish tostadas, and dessert. In the third photo, you can see the pizzas being grilled on one side. After they were turned over, the chopped topping, consisting of tomatoes, basil, feta cheese, kalamata olives, oil, and a few other things, is laid over the top and the grill is closed just long enough to melt the cheese. It doesn't take very long to make pizza this way.

Two kinds of pizza dough were provided, courtesy of my friend Karen who is a recovering attorney planning to open a bakery. She brought the freshly rising dough on flat sheets from her house in South Cathay and it smelled wonderful. After we made the pizzas with the topping Tory directed us in preparing, Karen experimented with some other toppings, including oil with herbs and different kinds of cheeses from the appetizer platter Tory set out. That's Karen at the grill in the cap with Tory and Kathy the doctor's wife (in red) and our friend Darla in the background in the middle photograph.

I think all ten of us were amazed that the dough didn't just drip onto the burners, but it didn't. If I ever have an opportunity to do some Indian cooking (Len has a bad reaction to the spices in it, so it's not likely), this is clearly the way to make naan.

The party was a huge success. The guest list consisted of the friends who come over to watch the Amazing Race and other friends who are foodies and love to cook. I invited everyone to bring their own aprons, knives and cutting boards, and most of the guests did. Tory provided for those who didn't.

I didn't tell Len what was going on before hand, only that I had something planned for Saturday night. I sent him to the back of the house until everyone arrived, then I brought him out, everyone yelled happy birthday and we explained what was going on: that everyone would participate in making dinner. He said "cool," and was particularly thrilled when I presented him with a toque and bistro apron to wear. He loves hats and costumes. He's working on chopping skills with our friends Michael the lawyer and Michael the doctor/movie producer in the picture where Tory is in the background in the first photograph.

We had a very pleasant evening to do this outside and each course proceeded at a leisurely pace. Except that I had gotten up early to make sure that all of the outdoor furniture was cleaned up, the lawn was clear of dog debris, and we had all of the paper and plastic ware we needed to eat on, I didn't have to do any of the prep. Tory did the shopping and brought just about everything necessary to pull this off. She even cleaned up afterwards and didn't complain about the half-finished state of the kitchen. (The unfinished shelves provided handy temporary storage for items that needed to be close-by but not yet needed. Karen was thrilled to have a place for the dough to safely sit while rising.)

I hated to limit the number of friends I could invite, but the size of the group worked well together, and I didn't get in each others ways. The feedback from everyone has been just great. Everyone liked the concept and the execution. I'd be more than willing to do another evening like this at the house if everyone who wanted to do it paid for themselves--that is, once my kitchen is finished. It's like going to a cooking lesson at Sur La Table or Williams Sonoma without the parking hassles.
Posted by M. C. Valada at 10:31 AM