Her Line's a Chorus Line (Sometimes) 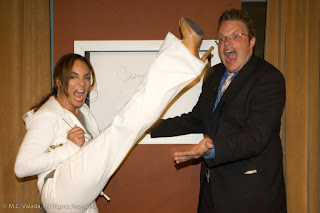 Jasmine Guy was the Mystery Guest on What's My Line Live on Stage on June 24. Until she was interviewed by J. Keith Van Straaten (who came dangerously close to being taken out by that kick in the photo above), I had no idea she was a dancer before being cast in "A Different World." I didn't watch "Fame" on television, so I missed her there.

She was a most delightful guest on the show. She did stump the panel, which had a bad night over all--they only got one guest's occupation. But it was a very funny show.