This photograph of the kitchen gives a better idea of how much stuff is crammed in everywhere. There's a lot of wasted space that collects dust and cobwebs that putting in a few doors would help.

In an ideal scheme of things, we'd move the wall that's on the left about 10 feet out into my garden. The carpenter has suggested moving our refrigerator (that chrome thing on the left) to the place where the cabinet is on the back wall, next to the built-in oven. The entire wall of cabinets would have to be reconfigured, but that's o.k. There is a very narrow area between the sink and the refrigerator, so moving the refrigerator would be really nice.

Currently, a lot of interior space in the back upper cabinets is lost to a lint vent from my dryer and I just found a lint vent that goes out to the roof tucked up in a hall closet that used to hold our heater. (When we switched to central air, that all went up on the roof.)

Oh, yes. We've already gotten rid of the terrible track lighting you see here. The new fan and light unit on the counter has been installed over the dining room table on the other side of the wall on the right. 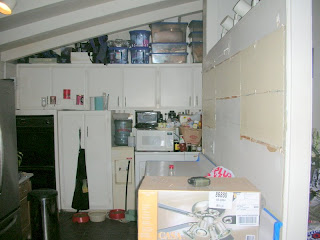