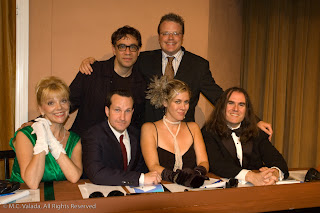 We lost most of Father's Day waiting for the carpenter who never showed up, thus denying Len his Father's Day brunch. Finally, we realized we needed to head over to Hollywood to do a day-late birthday get together with J. Keith Van Straaten (who was filming a still-secret project on his birthday), make a drop off to my friend Karen, and then head over to the Acme Theatre for What's My Line Live on Stage.

This week's panel is shown sitting in the photograph above: Teresa Ganzel (the "Tea-Time" hostess for Johnny Carson), Jimmy Pardo, Annie Wood, and Andy Zax. Standing is this week's Mystery Guest, Fred Armisen from Saturday Night Live, and WML host J. Keith Van Straaten. The other guests were the announcer for the Los Angeles Angels of Anaheim and the Los Angeles Kings, J. Keith's father who is a forest ranger in Colorado (it was Father's Day, after all), and a dance instructor who did a demonstration of "The Hustle." When guessing the "Dance Doctor's" line of work, Andy asked "If you do this on Saturday night, do you get feverish?" I just keep asking "do people still dance 'The Hustle'?")

For information about next Sunday's show, click here. My husband Len Wein will be a panelist on July 1 along with the hysterically funny Ms. Ganzel, so don't miss it.
Posted by M. C. Valada at 2:42 PM