What's New on What's My Line? 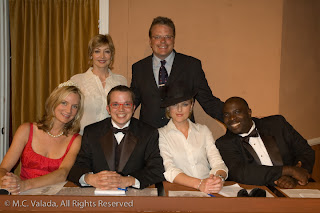 Over the past three years, a group of people we know have put on a stage version of the old television series "What's My Line?" at the Acme Theatre in Hollywood. The latest run is scheduled for five weeks and started on Sunday night, up against the last episode of both "The Sopranos" and "The Tudors," as well as the second game of the NBA finals (I'm rooting for the Cavs, in case anyone cares.)

My husband was a guest during the earliest run of shows. No one guessed him, but lots of people in the audience knew who he was. Afterwards, one of the audience members came up to tell him what a big fan he was and invited him (and me) out for drinks. That was Drew Carey (again, go Cleveland!) Len was then invited to be on the panel. And again, and again. He usually gets one slot a month when the show is in production and he's very good at it.

After we'd been in attendance for a while, the host and producer realized that I was taking extremely good photographs of the show and the post show groups (well, duh.) They finally asked me to be an official photographer, instead of just taking photos for fun. I wish it paid, but it doesn't. Fortunately pixels are cheaper per frame than film is to process, that is, once you pay for the camera, computer, software, and so forth. This year I've made a huge investment in a MacBookPro and Adobe software and now I've got to upgrade to CS3. I'm getting quite good at Lightroom.

Anyway, even though Len was out of town being a guest at the Superman festival in Metropolis, Illinois, I had to go to the show on Sunday night. This involved avoiding the lingering traffic from the Gay Pride festivities and skirting the traffic jam at the exit off the 101 for the Hollywood Bowl. It was easier than trying to get to the theatre on a Wednesday night, which is when the show used to run.

As always, the host was J. Keith Van Straaten. This week's panel was Beth Littleford (formerly of "The Daily Show"), Eric Mullegan of "Bones," Elaine Hendrix (the mean mom-to-be in the Lindsay Lohan version of "Parent Trap"), and Gary Anthony Williams of "Boston Legal" and "Boondocks." The mystery guest was Sharon Lawrence of "NYPD Blue" and Broadway fame. You can see them all in the photograph at the top of this entry.
Posted by M. C. Valada at 4:53 PM