Olbermann Hits Another Nail on the Head 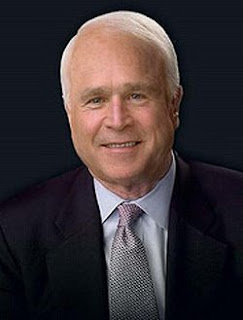 Keith Olbermann's got a great new graphic to illustrate part of the race to the White House. It was one of those things where I looked at it and said to my husband, "something's not right. Did McCain get a face-lift?" And then I realized what was up. The caption was "McBush" and the image was a seamless merging of the faces of John McCain and the pretender in the White House. OMG. It is priceless. I noticed it on Monday's show, but when I watched Friday's, it was used there as well. I don't think it's been in use very long because I'm pretty observant about things like this. Isn't Photoshop amazing when used by a skilled practitioner?
Posted by M. C. Valada at 2:04 PM

You know what, that's pretty good. I had to do a double take on the picture after I read the post. Now if I could just make my photoshop make me look younger and thinner...