There's a stack of books next to my bed. Actually there are several of them on my nightstand, divided into two with hardbacks and three with paperbacks. More than enough reading to keep me really busy for a few months. I read a little at night and a lot over lunch. Lately, I've forgotten to pack a lunch book.

Sometimes a book will jump the line and demand to be read ahead of anything in the queue, even books in progress. When Janis Ian's autobiography, Society's Child, arrived via express shipping on Friday, along with the special autobiographical Greatest Hits double CD, it definitely jumped the line. I finished it first thing Monday morning, after digging into it late Friday night when I should have gone to sleep.

Wow. What a life. And what an inspiration. 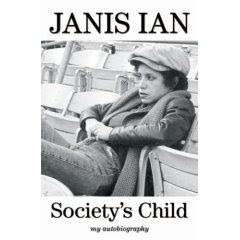 The first time I saw Janis Ian was on the 1967 Leonard Bernstein special, Inside Pop: The Rock Revolution. (Somewhere in my stored belongings is a reel-to-reel sound recording I made of that show.) She had a hit record at 14 with Society's Child, a song banned pretty much everywhere--certainly one that would not be played on my local sunrise-to-sunset AM station. Leonard Bernstein was determined to have people hear the song of the ending of an interracial relationship. In the prologue to the autobiography, she describes the scene at an Encino, California venue, where members of the audience start to taunt her with a phrase we could all hope was a thing of the past, but sadly isn't. At 14, it was terrifying. It would be frightening at any age.

What I also found interesting was her description of finding a place to eat somewhere in this "rural area" after the show. My law office was on Ventura Boulevard in Encino. Rural it no longer is (despite the one remaining farm and farm stand--Tapia Brothers--just north of the 101 freeway at Hayvenhurst Avenue), but a mere 42 years ago, it still was. I'm trying to picture that by remembering back to the days when Long Island still had huge potato farms which are now housing developments.

There was an interesting juxtaposition for me with this book: Saturday Night Live reran its very first episode over the weekend, as a tribute to George Carlin. Janis Ian was one of the two musical guests. She was riding high with At Seventeen, her second monster hit record. As I often do, I sat talking to the television. "Janis, the song is over. Smile." While it never works when I try to tell a Jeopardy contestant the answer, she did finally smile at the applause. In the one paragraph she devotes to this event in her life, it turns out she arrived in New York to do the show with a fever of 103 and a throat that felt like she was swallowing glass. No wonder she wasn't smiling.

At Seventeen is a song that just resonates with my experience as a teenager. I now really believe that most teenagers feel ugly and alone, but at the time I was 14, I knew I was an outcast. When Janis wrote the song, she did not think anyone would identify with it. Amazing. As I like to say, living well is the best revenge for being at the bottom of the food chain at any point in your life.

Janis' life is filled with incredible highs and lows. She's overcome a number of betrayals and serious brushes with death. She had a run-in with a sadistic IRS agent after learning her business manager had mismanaged her affairs and it took her years to work her way out of the debt that had built up. Her song This Train Still Runs is an anthem to overcoming adversity.

The prose is accessible and flowing. It isn't a long read--a little over 300 pages--but it is very entertaining and touching. Each chapter is a song title, with a few lines of lyrics preceding the text. It will be released later this month. Janis will be in New York for the release at an event on July 24 at the Columbus Circle Borders. She's on tour this year and does signings after most of her shows. She's a terrific performer and I recommend her live shows to you all.

I was lucky enough to be introduced to Janis Ian at the World Science Fiction Convention in Philadelphia in 2001. Robert Silverberg's wife, the lovely and talented Karen Haber, did the honors. She and Janis are about the same size and look like they could have been sisters separated at birth. Janis had just met Connie Willis and announced that to us, adding "I need to go to the bathroom and throw up." In her book, she talks about going to this convention and the emotional experience of meeting Connie and the other writers she had long admired.

A few years later, same convention, different city, Janis planned to sit in a line to get Harlan Ellison to autograph her much loved copy of Dangerous Visions. She had arranged for her partner, Pat, to sit in the growing line so Janis herself could see Harlan's solo event at the convention. As she told me of her plan, I said "no, no, no. There's no reason for you or Pat to lose that much of your day and Pat should get to see Harlan perform as well. I'll take care of it." Harlan was as thrilled to meet her ("I have all your albums in vinyl") as she was to meet him. It was adorable.

Janis was one of the first performers to sign on to iTunes and she makes some downloads available for free from her own website at this link. I particularly recommend Married in London, which is unreleased elsewhere. Donations for the music, and other purchase made on the website, go to the Pearl Foundation, named for Janis' mother. The Pearl Foundation funds scholarships for mature students at a variety of colleges. Since I myself once benefited from a grant aimed at women who return to school after time away (the grant from the American Association of University Women helped pay for my first year at law school), I think this is a very worthy cause.
Posted by M. C. Valada at 4:16 PM

It should be an interesting book to read. We also watched the SNL show last week. Truthfully, I had almost forgotten the song and Janis until I saw it again. It was so long ago.

Being a folk fan, I've got lots of her CDs.

I have met Janis several times working backstage at a festival. She is one of the most gracious people I have ever met. She is very charming and treats everyone as an equal.