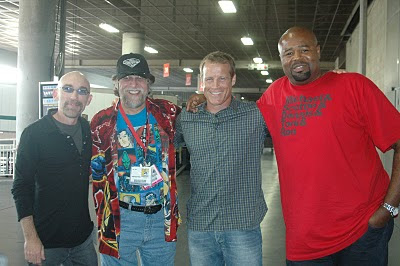 While Len and I feel we are slowly moving human targets these day, "The Human Target" is actually a television series which premiers on Sunday night at 8 p.m. (7 Central) on your local Fox (not Fox News) channel. I've seen the pilot, and it is great fun with terrific casting. I may be prejudiced, but the critics and test audiences agree.

The Len Wein (with artist Carmine Infantino) character debuted in DC Comics back in 1972--it was Len's very first new character creation--and had a 7-episode TV series almost 20 years ago starring Rick Springfield with great production design by comic book artist great Michael Kaluta. (I remember we had a party the night it premiered, and the sewer backed up. Was that a night to remember.)

The new series stars Mark Valley, Chi McBride, and Jackie Earle Haley. We had a great time when we met them at Comic-con last summer (Len's between Jackie and Mark in the photo above), and Len's 6-part comic book mini-series which ties into the show starts coming out at the beginning of February. While we, the walking wounded, thought we'd throw a viewing party, we've been invited to the official cast and crew party on Sunday evening. I'm thinking about bringing along a Sharpie, getting the cast to autograph my cast, and auctioning it for the Hero Initiative (which benefits older comics creators) when it comes off. It seems appropriate, or at least a fun idea.

Please do tune in. It will help pay for a new house if it succeeds. The second episode runs on Wednesday following American Idol, and its regular spot will precede American Idol on Wednesday.

Thanks to everyone for your good wishes. My doctor decided to wait another two weeks before making a decision about surgery. While I'd rather not have surgery, if it will speed up the process of getting better, I'll deal with it. It's rough having both of us function at less than full capacity at the same time.
Posted by M. C. Valada at 8:05 AM 1 comment:

I'm still here, but not quite whole.

The old year ended and the new one began badly. I have a cast from the middle of my upper left arm to my fingers. On the Monday after Christmas, I tripped on a sprinkler head and went face first into an asphalt driveway. I tried to keep my arm safe, but it didn't work--the ulna broke close to the elbow and the radius cracked there. The x-ray technician said it probably would not have broken but for the metal in my arm from when I broke the ulna 8 years ago.

It was ugly when I tried to get up, but I realized I was in trouble right away, so I sent my niece to get wood and Ace's leg-wraps and we made a splint and headed home. The girls kept asking "Don't you want an ambulance? Don't you want to go to the hospital?" Been there, done that. No thanks if I can avoid it. We managed to figure out the name of the surgeon who took care of me last time, and Len and I headed to his office/clinic where I was x-rayed and put into a cast. On Monday, we'll see if I'm going to avoid surgery. Keep your fingers crossed.

Meanwhile, as we got the house ready for what was supposed to be our holiday party last weekend, Len had a bit of a scare that saw a four-night stay at Cedars Sinai. We were lucky that friends were at the house, since I can't drive very well with the cast, and that we were able to bypass most of the people in the Cedars wait room to get into the ER. The treatment stopped the acute problem, but our personal doctor came in and outlined a series of things which would need to be done before Len got released, so he was admitted. He looked great and sounded chipper throughout, you'd never know anything was wrong except for the huge bandage on his neck.

We are grateful for friends who dug through the ruins of our house and who have provided transportation services over the past week. We've got a good support system. Special thanks to Bob, Becky, Kerry, Bob, Lisa Jane, Karen, Chase, and the much appreciated Dr. Michael for helping us through this round of trouble.

So my 11 days off from work wasn't quite as much fun or as productive as I planned. My horse won't remember me when next I see him. We are moving everybody to a new barn at the end of the month, and I feel I will be unable to help. And I do miss my pretty boy right now. I'm glad I got his Christmas cookies to him before this happened.
Posted by M. C. Valada at 1:01 PM 5 comments: