Another year, another San Diego Comic-Con International survived.  Michael and I headed down on Wednesday morning after dropping Len off at Cedars-Sinai for dialysis.  That way, I could have a few extra hours with my dear friend Gloria Benson, who was bringing her granddaughter Seven to Comic-Con, the first trip for either of them.  Len came down with a couple of friends, but traffic delayed his arrival until almost 7:30, by which time I had picked up Gloria and Seven at their hotel, had lunch, checked into our hotel, picked up all of our badges, and started swimming in the sea of humanity at the preview opening of the convention. 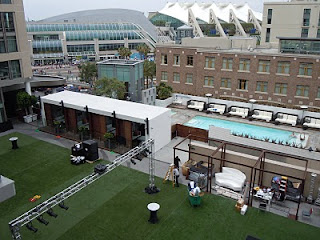 This year, we stayed at the Hard Rock Hotel.  It was our 10th choice, but at least it was walking distance from the convention.  Those are the "sails" at the top of the SDCC.  As you can see from the photo we were a few stories above a party area, but the one you can't see was the noisy one.  There was always music playing--I got a kick out of the check-in desk asking what my choices of music were, and when we got to the room, classic rock was playing.  I knew I was home when I stepped off the elevator and there was a huge photo of the Beatles in Miami in 1964--a photo a knew well from my Beatles trading cards of that era. 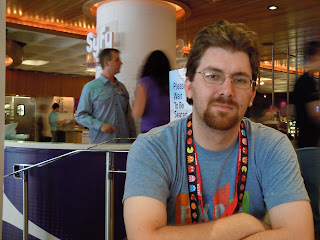 As it did last year, SyFy took over the cafe in the Hard Rock, and the decor and menu reflected that.
Here's my son, Michael, waiting for breakfast.

On Thursday, Len was on the panel that followed the showing of a documentary about the 75 year history of DC Comics.  It will be released on November 11.  It was informative and touching. The clips of Julie Schwartz made us all cry.  We miss Julie, who was the editor of Superman for many years and brought on what is called the Silver Age of Comics by reviving The Flash.  I knew Julie before I ever met Len.

Friday was the Warner Bros. & DC Comics Party.  Gloria and Seven stood in line for three hours that morning and failed to get into The Big Bang Theory panel because the True Blood fans had taken over the 6500-seat room first thing in the morning and stayed until that panel at 5:30 at night.  Nobody told the people in line that the room wasn't being cleared and that they would never get in.  The Bare Naked Ladies played and Wil Wheaton moderated TBBT panel, so I was really sorry that I didn't get in, either.   I figured it wasn't really fair to ask Bill Prady to get me in two years in a row (and Bill was sad I didn't ask.) 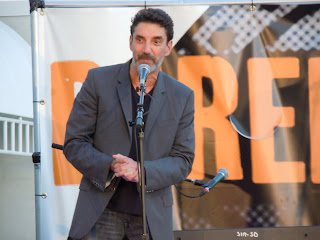 Fortunately for me, Bare Naked Ladies, who wrote and perform TBBT theme also played the much smaller WB party, introduced by Chuck Lorre. BNL were not bare, naked, or ladies. 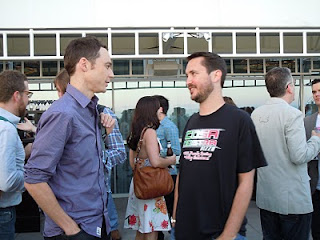 Jim Parsons and Wil Wheaton had a bit of a chat at the party. I can't seem to upload the video with Johnny and Simon swaying to the band, though.

As they did last year, members of the costumer's guild took some of the different over-sized WB swag bags and turned them into fashion statements from the 1940s. 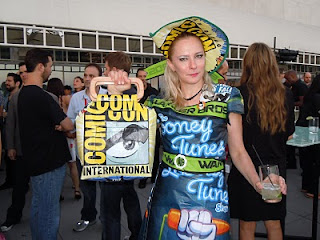 I particularly like the hat in this photograph.  I missed photographing the zoot suit. 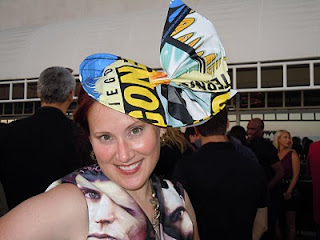 Mark Valley was at the party, but we missed talking to him. 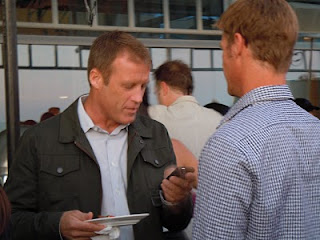 Here he is talking to the sheriff on Eureka (and checking his cell phone.)

We did catch Chi McBride, who calls me "Mrs. Len" when he sees me.  He's utterly charming and inclined to kiss me on the wrist.  I think he's cuddly.

Seven expressed her desire to meet Stan Lee, and I was able to accommodate her wish when Stan walked right in front of me at the preview.  Unfortunately, we couldn't get cameras out to record her reaction, which included Gloria admonishing her to "breathe, breathe." 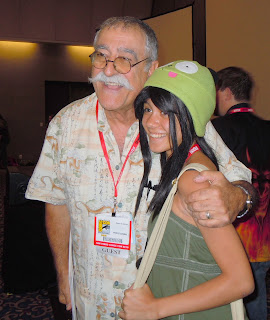 I was also able to introduce her to the amazing Sergio Aragones, and, on Saturday, even stopped Sergio to photograph them together.  He and Gloria spoke in Spanish and he cooed over Seven.
At the Quick Draw Panel, Sergio was one of six artists who performed.  The top half of the drawing of Sergio was done by another Mad Magazine artist. 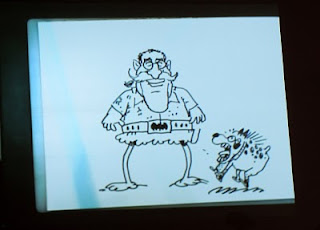 The image was covered at the belt and Sergio drew the bottom half without knowing it was a drawing of himself.  Hilarity ensued.

The other two drawings below were done by Sergio to incorporate the caption "Sit on it."  I think he did six drawings on that round all together.  All different. 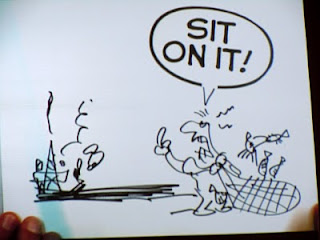 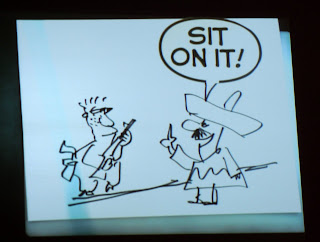 Len participated in the Quick Draw by guessing words or phrases the artists drew.  He really has a good time doing it. 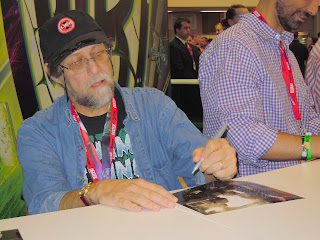 Later on Saturday, we split up so he could sign with the Human Target cast and do the press feeding frenzy and I could go to a private cocktail party at the Hilton. 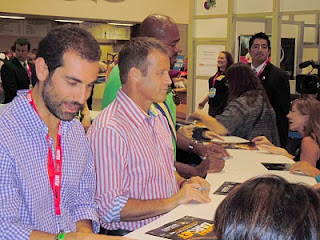 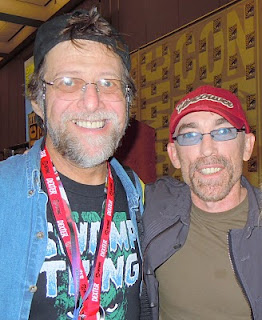 I got back in time to catch the Human Target panel, but I almost didn't get into the room.  We did an end-run around security, and after, we got a photograph of Len with Jackie Earle Haley.

The Hard Rock had an  11 a.m. check out, so I spent the morning taking care of that.  Len had the annual Pro v. Fan trivia contest that afternoon, and then we did dinner with Paul Levitz before the dead dog party and the drive home.  Wisely, I took Monday off from work, and even though I couldn't sleep all day, it was nice to catch a few extra hours of shut-eye.

And it is a mere 51 weeks before we do the whole thing again.

She's fine, but we had a scare with New Puppy, who turns 5 months old today.  We took her in to be spayed two weeks ago.  The rescue group made us promise to get it done before she turned five months old.  We took her to their vet, because the spay was part of the adoption fee. We were told they nicked her urethra which required the removal of one of her kidneys.  She had a huge incision and looked so helpless when we went in to see her.  Everyone was upset, rightly so.

It has slowed her down almost not at all.  A few days of pain pills, 10 days of antibiotics, and, except for the staples that come out tomorrow, you'd never know anything was wrong.  I've gotten attached to seeing her run around in my tee-shirts (a really good alternative to the Cone of Shame which was suggested by the vet), but I'm sure she'll be happy not to wear it any longer.

We were so happy that there was no change to her delightful personality, and she's happily getting into all kinds of mischief.  I had intended to start her in a puppy obedience class, but that will have to wait until the Fall since the summer session has already started.  She will get to go to the dog park with her big brother, and I'm sure that when my friend Lira house-sits next week, she will get some obedience training.
Posted by M. C. Valada at 10:14 AM 2 comments: