Friday was Ginger's visit to the vet, who pronounced her perfect in every way.  No kennel cough in evidence.  A weight gain of seven pounds.  Time for an adventure!
On Saturday, I took Ginger up to the barn to meet her really big brother, Ace.  She was appropriately apprehensive, unlike Dexter who thought the horses should respond to barking and play-bows by, well, playing.  Ginger had a rough and tumble time with Gayle's Aussie shepherd, Eli, even though she was on a lead.  After Ace finished his lesson, she got a chance to get a little bit closer. 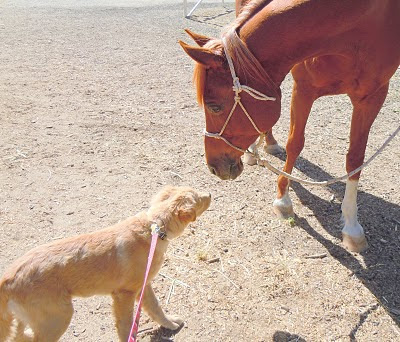 Willie, a Haflinger, was less intimidating, so she got even closer. 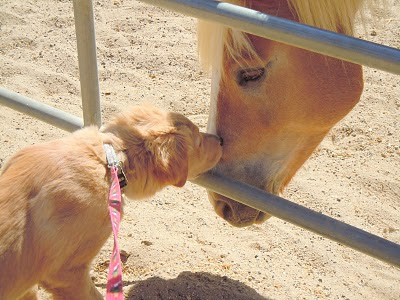 I would call it a successful visit to the barn and she even got a lesson in walking on the leash from Gayle.

On Sunday, she had us in hysterics and reminded us of a poem we once heard Tim Curry read at the L.A. Public Library. The poem is from an anthology called Unleashed: Poems by Writers' Dogs.  This four line poem is called "Birch" and it is by Karen Shepherd.  Every dog owner I know understands this poem. 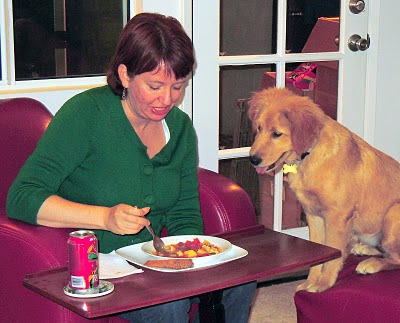 Our friend Lisa, subject of this display of dog cuteness, does volunteer work for a pet adoption charity, so she was not all bothered by having Ginger hover near by looking for a hand-out.
Posted by M. C. Valada at 4:05 PM 2 comments: 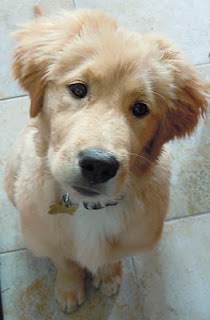 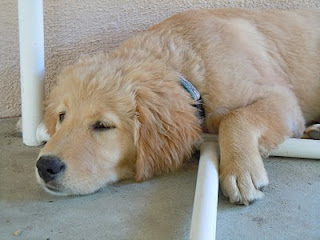 I had no idea that Jeopardy! promoted the players of the Tournament of Champions this extensively. Did study the Fortune 500 list, but it didn't come up in my game. The New York Times Science tie-in did. 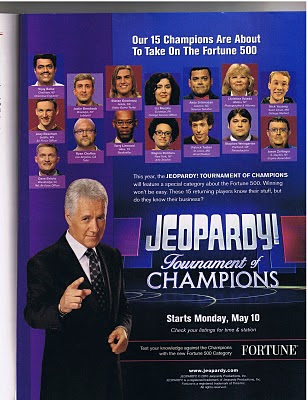 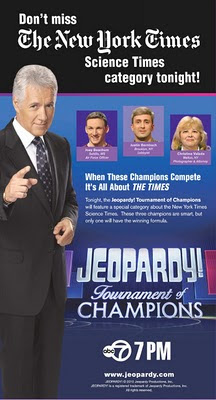 This ad ran in today's New York Times. I figured I might make mention in the paper when my famous spousal unit passes away. I'm happy that I won't have to wait that long--and that I got there on my own. If you've got the paper, it's page C4. Tune in to Jeopardy! tonight to watch me play against Justin and Joey. Check your local listings for time and channel.
Posted by M. C. Valada at 12:43 PM No comments: 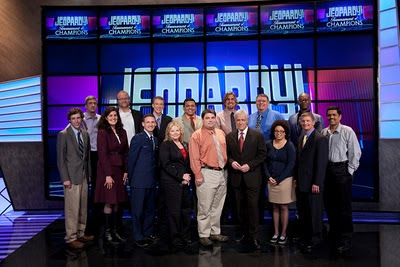 Here is a photograph of the fifteen contestants you will see on the quarter-finals of the 2010 Jeopardy! Tournament of Champions next week. And here is a link to a promotional video that is running on the Jeopardy! web site right now. I'm the last interviewee.
Posted by M. C. Valada at 2:31 PM No comments:

The Jeopardy! Tournament of Champions starts running on May 10 and carries through until may 21. The first week is the quarter final rounds where three college champions and the twelve players who won the most games (down to those who won 4 games in the regular season) since the last time there was a ToC (which shot in January 2009 and ran in March 2009.)

My quarter-final game airs on Thursday, May 13, 2010. I understand that in some parts of the country, Jeopardy! is running at a different time than usual due to the sports play-offs. So check your local time and channel to watch.

I recommend watching all 10 days, because the players are just amazing competitors.

The Jeopardy! Celebrity Invitational for charity finals are running this week. I got to watch the final rounds being taped, and I really enjoyed myself. There's much less pressure sitting in the audience.
Posted by M. C. Valada at 9:05 AM 1 comment:

Email ThisBlogThis!Share to TwitterShare to FacebookShare to Pinterest
Labels: Jeopardy

Can anyone explain what this means:

This conference aims to critically engage contemporary spatial, social, ideological, and political transformations in a transitional world. In a process-oriented world of movement, the global north and global south now simultaneously converge and diverge in a dialectic that shapes and transforms cities, suburbs , and rural areas. This conference addresses the nature and mapping of these forces and the dynamics that propel these changes. The conference also examines and defines the myriad of different spaces that make up our contemporary world, including urban, edgeurban, de-urban, micro-urban, greenfield, and off-the-grid.

I got this in my e-mail at work, and it looks pretentious. I suspect it is someone trying to impress a department chair. Someone's tuition dollar at work, or, worse, research dollars.
Posted by M. C. Valada at 2:57 PM No comments: