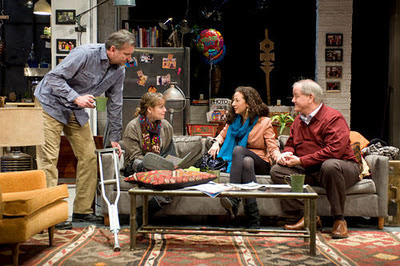 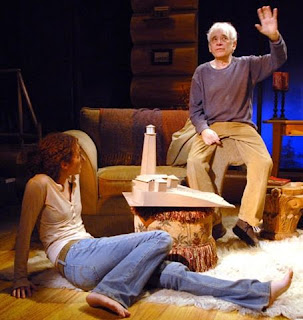 The photographs are publicity stills I pulled down from the Internet. If I knew who took them, I'd be happy to give credit. If the lower one was shot by Joan Marcus, "Hi, Joanie. Do you still have that picture of me with Douglas Fairbanks, Jr. in your files?"
Posted by M. C. Valada at 3:37 PM No comments: 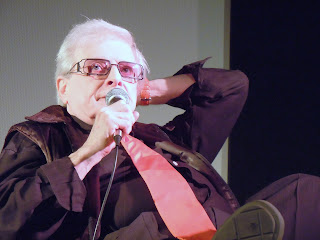 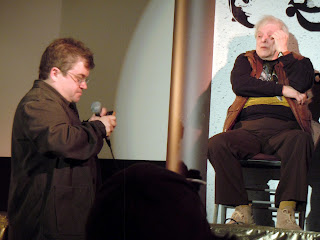 I've reached a point where I have no idea how long it has been since I've posted a blog. This has gotten so bad that I didn't even check to see that I had comments awaiting action. So I apologize to Mike Garrett, who wanted advice about appearing on Jeopardy! I hope he had a great run on the show. According to the J-Archive, his episode(s) (which shot in mid-December), has (have) not yet run, so I can at least look forward to watching him compete.

And congratulations are in order for Amy Stephenson,  a fellow member of the Friends of Bob Harris lending group on Kiva, who had a three-day run on Jeopardy! earlier this month. She'll be contributing some of her earnings to our worth efforts when her check shows up late this spring. Thus far, our group has loaned over $1.5 million and Bob himself has loaned over $100,000.

Bob Harris himself is on the down-hill side of finishing his book about micro-loans called The First International Bank of Bob. I highly recommend his previous books Prisoner of Trebekistan and Who Hates Whom.  While I sometimes feel I've known Bob forever, we met only about four years ago. Before that I "knew" him from his many appearances on Jeopardy! as a regular contestant, a Tournament of Champions contestant and a contestant on two different special Jeopardy! championship series and from the radio commentaries he used to do for KNX radio that may have been syndicated around the country. Bob and I also both have degrees from Case Western Reserve University (his is an undergrad degree and mine is from the law school) but we were there about 10 years apart. Should he ever appear in your area to do a talk or a book signing, go.  He's very, very funny.

Because of Bob, I joined Kiva and talked about it when I appeared on the Jeopardy! Tournament of Champions in 2010. I've made 80 loans so far, all of them to women who are trying to improve their lives and the lives of their families in something in excess of 30 countries. It's a great way to remind myself that I am helping to improve the world $25 at a time with money that can then be re-loaned upon repayment.  Feel free to join me.
Posted by M. C. Valada at 11:48 AM No comments: