Some of you may remember that we had no intention of moving back into our house after we had a fire in 2009.  Unfortunately, health matters brought a screeching halt to our attempts to find a house to purchase (and the one on which we made an offer fell into a black hole of pre-foreclosure hell.)  So, in March, we moved back into the rebuilt and somewhat reconfigured place Len's owned since before we met.  Lucky for us, my winnings on Jeopardy! and a royalty check for Lucius Fox's appearance in The Dark Knight meant we didn't have to put our place up for sale to have the down-payment for a bigger home--a real luxury these days.

Trying to find the right house for both of us took a bit of time, and closing on it has taken longer than we expected.  Escrow closed on August 20, but we discovered the previous occupants had left a mess behind.  The clean-up crew has worked tirelessly, the painter moved in for a week, the electrician had plenty to fix, and, without folks breathing down our necks to move into our house, we could take a relaxed and organized approach toward getting our stuff to the new place.  On Thursday, the movers will take our furniture to the new location. This is the back yard : 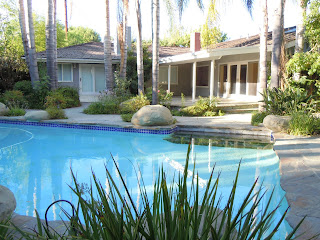 It's about four miles from where we currently live, and it's more than twice the square footage in both house and land.  It isn't big enough or zoned for Ace to live in the back yard, but I will also be several miles closer to him.

I'll finally have a big, eat-in kitchen with lots of counter space, a prep sink in the center island and a Viking cook-top with a grill.  The house has three fireplaces, a pool house with a 3/4 bath, a summer kitchen with built-in grill, refrigerator and sink (and disposal!)  The house has two enormous bathrooms with glass showers and separate whirlpool bath tubs, plus a small powder room off the laundry room.  There are four bedrooms, a large living room, something described as a formal dining room (but too small for what I'd consider a formal dining room table), a family room, and what must have been another small bedroom that's been converted to an enormous walk-in closet.  We're going to make the attached garage our library/workroom.  And, oh yeah, there's a wine cellar.

If you know anyone who'd like to buy a cozy, completely renovated mid-century ranch house with a pool in Woodland Hills, California, walking distance to two Orange Line stops, one house away from the bike-path, a few blocks from Pierce College, and occupied for the past 24 years by famous comic book writer (and Wolverine and Swamp Thing creator) Len Wein, it will be on the market in a matter of weeks.
Posted by M. C. Valada at 11:43 AM No comments:

I just saw a news report that acress Patricia Neal has died.  She starred in my favorite science fiction film, The Day the Earth Stood Still.  I'm talking about the 1951 original, not the 2008 abomination.  Big explosions do not make a better story, and the director who thought he was honoring Robert Wise was delusional.  I recently watched, for the first time, her film A Face in the Crowd.  It was simply amazing.  Her turn as Olivia Walton struck me as closer to the reality of what a Depression-era mother with seven children would look like than that of Michael Lerned (or Maureen O'Hara in Spencer's Mountain, which preceded them both.)

For a very brief time, a friend of ours dated her vivacious daughter, Tessa Dahl.  We had dinner together once.  As she and I sat talking, the pieces started falling together, and I realized who this Tessa sitting next to me was.  There were 10 or 12 of us at the table, and Tessa was stunned to learn that all of us considered The Day the Earth Stood Still to be one of the greatest science fiction films ever made.  She had never seen it.  I hope that she subsequently took the time to watch it.  It holds up really well, and her mother is perfect in it.
****
I was rather glad to see that Keith Olbermann brought up Patricia Neal on his Monday broadcast and mentioned both The Day the Earth Stood Still (describing her as "the only rational character") and A Face in the Crowd.  I've long recognized Keith's geekdom, and, of course, he continually (and rightly) compares the irrational Glen Beck to Andy  Griffith's character in A Face in the Crowd, whom Patricia Neal discovers and then uncovers.
Posted by M. C. Valada at 9:31 AM No comments:

Little Miss Trouble earned herself a trip to the emergency room last night.  For the second time, she got into something that made her face swell.  The first time, it was just her eye.  This time, eyes, neck, jaw.  She looked more like a pit bull than a golden retriever.  I figured it was better to get her to a vet than to risk a middle of the night crisis, so off we went.

54 pounds of puppy is a lot of strength, and trying to manipulate her while opening and closing doors and filling out paperwork is a trick.  At one point, the vet tech suggested rattle snake--unlikely, but not impossible--but they couldn't find fang marks to match.  I figure it was a spider or one of the bugs she likes to catch got her instead.  Two hours, with steriods and benedryl by IV, later, we headed home.  She looked a bit better, but by this morning she looked herself. 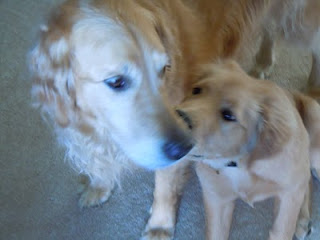