Wondercon was a relatively small convention the first time I attended it with Len, probably in 1992 or 1993. It was held in the convention center in Oakland, walking distance from some decent restaurants on the Bay. Noel Wolfman and I would spend the days visiting antique shops in Oakland or go across the bridges to visit San Francisco proper or maybe go north to Sausalito. 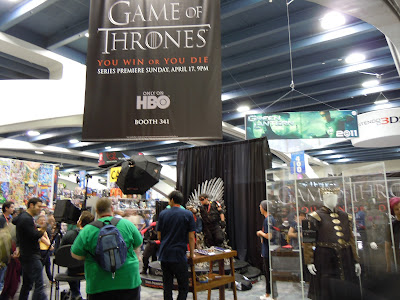 We went relatively frequently when the convention picked up at least part of our hotel costs to have Len in attendance. He went without me sometimes when I was too busy for work, and then he had many long gaps in attendance, during which time the convention moved across the Bay to the Moscone Center and the convention would no long kick in on the rooms. 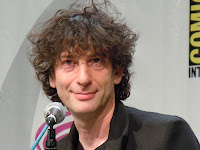 Last year, Len was once again invited to be a guest and I took several days off from work to drive up to San Francisco and enjoy the vacation. Things had changed. It was approaching Comicon size with some 50,000 people expected. It was the kind of event where you had to make plans to meet with people, because you weren't going to run into them anywhere. (The only time we saw Neil Gaiman was at his panel, even though we were in the same hotel.) We were actually assigned a couple of minions (for which we were grateful) who managed to make sure we got lunch while we manned a guest table on the show floor or who watched out for stuff when we went to panels. 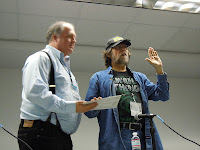 Because of Mark Evanier (in the photo with Len before the interview he did at Wondercon), we also got to see Beach Blanket Babylon, which has been running since I lived at Stanford in 1974-75, but which we had never seen. Hysterical, but the wigs and costumes were the truly amazing part. We saw a few friends we normally don't get to see and we had some notable meals. We met the "Goths" from the Amazing Race (which was on the air at the time and they hadn't yet been eliminated) and it was the first time that strangers came up to me because the recognized me from Jeopardy! Having had such a good time, we resolved to return this year. 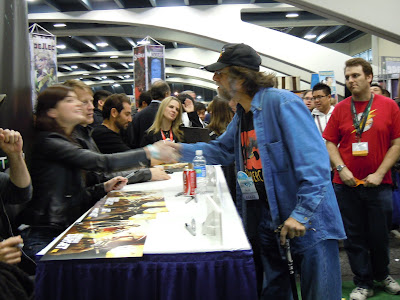 Well, we did return, but not to San Francisco. Renovations at the Moscone meant the convention couldn't be there, so the con-com, the same people who run Comic-con, decided to give Anaheim a try. That made it a no-brainer for us to attend, and we even brought Michael along for the weekend. 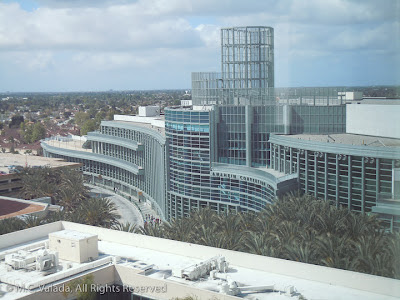 The Anaheim Convention Center has grown significantly since the last time the World Science Fiction Convention was held there (I think around 2006, but I'd have to look at photographs to be sure), and we don't get down to Disneyland very often any more. The convention was well attended, but it was only one of three events being held that weekend (one of the others was a huge cheerleading competition and I can't remember what the third was), so parking was dreadful (at least we had hotel parking) and getting anything to eat in a hurry was next to impossible.

There was one guest I was intent upon meeting at the convention: Joe Hill. I'm a big fan of his Tweets and I had been following him for quite a while.  Since Len has known his father since they were comic fan boys in the 1960s, I figured it was a good bet that we would meet him.  As it happens, Joe was a huge fan of Len's and invited us out to dinner with his publisher and some friends the first night of the convention. It was the best meal of the weekend, and the conversation was sparkling. 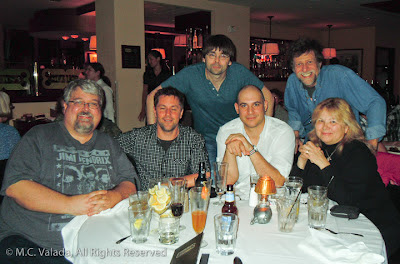 Joe's the one standing with Len. Joe and his friend Jason Ciaramrella (sitting next to me in the photo) found out about my run on Jeopardy! and peppered me with questions about it. We also talked about Joe's father's experience on the Jeopardy! Celebrity Tournament of Champions many years ago. Oh, right, burying important information (if you can't tell by the clear resemblance): Joe's father is Stephen King.

Wondercon was the first opportunity for DC to promote Before Watchmen, the somewhat controversial project which will be published over 38 weeks, starting in June. 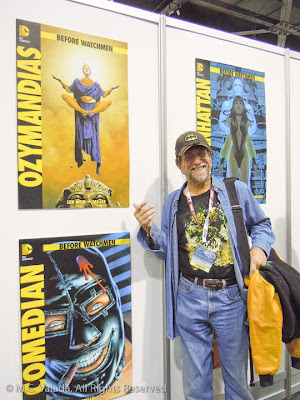 Len is writing one of the books, Ozymandias, and the original pirate serial that runs two pages at the back of every one of the 38 issues, The Crimson Corsair.

The thing that happens at conventions is that we run into people who live very close to where we do, whom we rarely see outside of the convention circuit. Here's Len with Michael Davis, a very funny and talented gentleman. 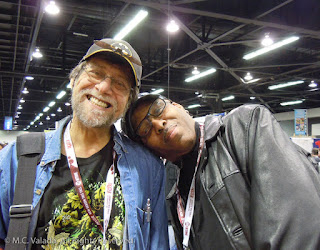 They've known each other a very long time.

Hall costumes and costume competitions are omnipresent at comic and science fiction conventions. I'm very fond of the steam punk look that is so popular these days. I haven't yet attempted to participate, though Len has. 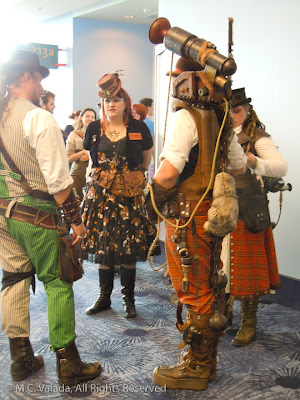 This group of people were hanging around in the halls on Sunday, just before we left to go home. I love the jaunty hat on the woman and the grenade launcher on the fellow on the left. Len's been pulling together pieces of a costume over the past couple of years. He particularly likes the proto ray guns that look like the come from Jules Verne. We have several of them on display at the house, the most beautiful of which comes from Weta, Peter Jackson's design house.

Next year? We're not sure where Wondercon will be. If it is back in San Francisco, we might go. If it is in Anaheim, we will most certainly attend. This is going to be a major travel year for Len. I've already traveled to Chicago with him for Chicago Comics and Entertainment Expo (C2E2) where he was a guest and we got to see my niece perform at Steppenwolf. He followed that with trips to Vancouver and Dallas and will be off to Albuquerque in two weeks, Toronto in August, Montreal in September, and New York in October. There's also an invitation to London in February. And we'll be in San Diego for Comic-con in July.

Last evening, as we were getting ready to go out for dinner, I heard one of my dogs barking. It was a different kind of bark than he usually makes. I took a peek and saw he was standing at the kitchen door and calling out periodically. I asked my son if there was something in the back yard. Turns out that there was: 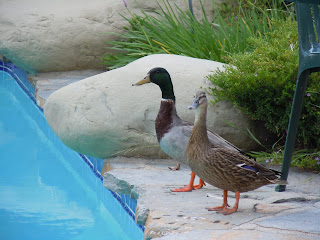 I'm pretty sure it's the same breeding pair of mallards I saw strolling across a neighbor's lawn last week.

After the fire at the old house, as the place was sitting in limbo before the actual rebuilding began, a pair of mallards started hanging out in the back yard.  The first time I discovered them, it startled me, but then I got used to them swimming around the pool and looking for bugs under the cedar trees along our back wall. Basically, with no dogs around, they could live in peace with a big swimming hole (they didn't mind the algae build up) and a certain level of shade from a tree that had branches hanging to the water.

With three Golden Retrievers in the yard, on of which is quite aware she's a water dog, the new house is hardly duck heaven. But they got a nice swim in and got to walk around Maui East for a while, much to the frustration of the dogs in the kitchen window.. By the time we got home, they were gone, but I expect they may show up somewhere in the neighborhood again.
Posted by M. C. Valada at 11:02 AM No comments:

Email ThisBlogThis!Share to TwitterShare to FacebookShare to Pinterest
Labels: Ducks 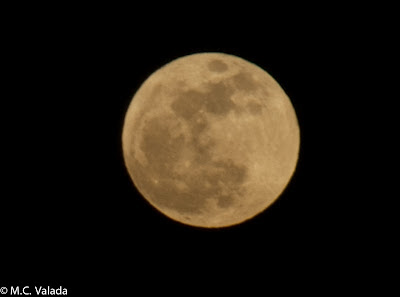 My digital camera like to argue with me. When I set it on manual and tell it that the exposure is the same as on a sunny day, it refuses to release the shutter. "You can't possibly be right," it says. "I've got almost 40 years of professional experience," I tell it. "I know the proper exposure is the inverse of the ISO at f/16. Dammit, listen to me!" It won't, so the image isn't as sharp as it should be because I have to fool it into releasing.

So this is the lovely moon over the San Fernando Valley tonight. I'm glad it was clear.
Posted by M. C. Valada at 9:12 PM No comments: