The golden age of science fiction is twelve. I started reading science fiction a bit earlier than that, but it set me on a journey which has taken me to wonderful places and given me amazing friendships and acquaintances. I read Edgar Rice Burroughs at exactly the right age, when I wasn't aware of his shortcomings as a writer, but I could soar on his imagination.  I loved his Mars books.

When I married Len and came out to California, our circle of friends grew to include several of the writers and the producer who were working to bring A Princess of Mars to the big screen for Disney. That movie never got made, but somehow a Pixar director got the project brought back to life and the movie hit the screen two weeks ago as John Carter. 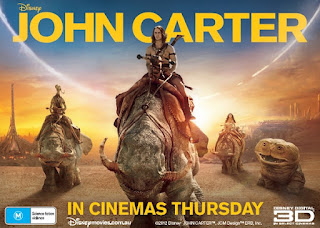 It has been hailed as a flop of the magnitude of Ishtar, when the problem is not the film but the Disney marketing department.

My observations of the Disney marketing department go back to the time when Len was editor-in-chief of Disney Comics. This was at the height of the comic book collecting frenzy where books were selling in the millions to people who thought they would eventually get rich selling their copy of the "Death of Superman" or an Image #1 book. You would think that Disney would be happy to support this product which appealed to kids of all ages, but you would be wrong. Disney refused to make space in its stores for the 1 square foot of space a comics dump display would take for the monthly books. Disney's in-house U.S. comic book division lasted two years and they outsourced it again. I have a pretty low opinion of the Disney marketing division when it comes to supporting anything but the core Mickey Mouse characters and theme parks.

The first problem with marketing John Carter is the title. Isn't John Carter a character on ER? (Just another example of where Michael Creighton stole things.) My friend, the original producer whose name does not appear anywhere, not even in a credit to thank him for getting ERB, Inc. to agree to a Disney deal back in the 1980s, says that was part of the original agreement and that ERB, Inc. wanted that title for trademark purposes. ERB, Inc. is notorious for using trademark law as a way of maintaining control of a character where the copyright has long expired. (You can find plenty of examples where they've done this with Tarzan over the years.) As I said, big mistake number one. From a trademark stand point, the title could still have been big-letters-John-Carter, but it should have added a subtitle indicating that it is a series (and bolstering the trademark claim.) JOHN CARTER: A Princess of Mars would have been perfect.  JOHN CARTER: Under the Moons of Mars (the original title in serial form) would also have worked. If I hadn't turned down Danton Burrough's offer of employment 7 years ago--a short story for another time--maybe I could have convinced somebody this would be a very good idea. Oh, well.

The second problem with the marketing of John Carter was the lack of any reference to Dejah Thoris, either as a kick-ass scientist-warrior or as the love interest of the film.

Rumor has it that Disney did not want "princess" in the title, because boys won't go to a "princess" movie. They didn't want "Mars" because of some other flop they had. Disney had its head in a dark place about this one. LOTS of twelve year old boys read A Princess of Mars growing up. Depending on their current age, they will talk about covers by Frank Frazetta (below), Michael Whelan, or another artist. Some of them will even admit to entering puberty upon seeing those covers. As for "Mars," maybe if the other film had been less of a POS, it would not have flopped. 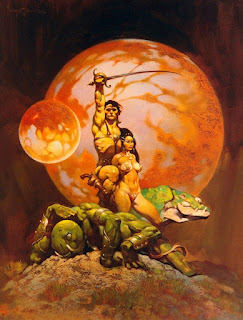 I saw exactly one trailer for John Carter. It did not make me want to see the film. But we went anyway, with some trepidation because it wasn't going to be the film Ted and Terry or Melinda wrote for Michael, and we knew where the broken hearts were. Knowing Michael Chabon wrote the film we were going to see was encouraging, and seeing how some writers we knew with advanced screenings felt encouraged us.

We loved the film. I thought it started out slowly, but it reached an emotional hook and carried me through to the end. John Carter looked just fine, although he lacked the wear-and-tear I pictured a Civil War vet from the south would have. Tars Tarkis and Sola were wonderful, and who could resist Woola. And I loved, loved, loved Dejah Thoris.

In all the time Princess of Mars was part of the dinner discussions with our friends, I don't remember us ever taking about who would play Dejah Thoris. We spent plenty of time on casting John Carter. Disney wanted Tom Cruise, which we all thought was a terrible idea. Tom Hanks wanted the part before he had two Academy Awards, but Disney said no (I love Tom Hanks, but I don't see him in a period piece.) Michael (the producer) wanted Viggo Mortensen, before he did Aragorn, after seeing him in A Walk on The Moon. That would have been brilliant casting. I pushed for Hugh Jackman from the moment we saw him as Wolverine. He turned the part down. He could have had two franchises. So we got Gambit instead of Wolverine. I can live with that. 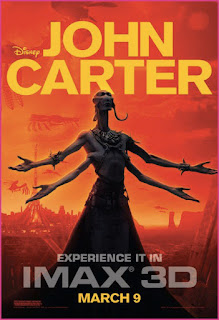 But Dejah Thoris? It's not the kind of part a lot of actresses get to play. Carie Fisher played her in Star Wars (and make no mistake about where George Lucas stole a lot of Star Wars) and Karen Allen played her in Raiders of the Lost Ark. I think that Lynn Collins, whom I had only seen previously in Wolverine, did a great job. Smart, brave, honorable. A great role model for girls, much as Hermione is in Harry Potter (as opposed to that idiot Bella in the Twilight franchise.) 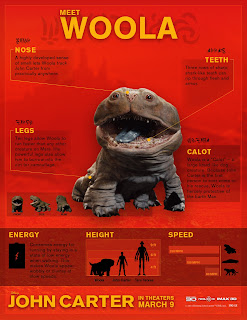 I want my Dejah Thoris Disney Princess Barbie Doll. My husband (and every male I know) wants a Woola stuffie. But Disney didn't even bother to do merchandise based on this film, which says to me they scuttled it from the get-go. Nevertheless, I think you should all gather up the family and go see John Carter.  You really will enjoy it. It is a beautifully designed and executed swashbuckling film. And maybe this fan trailer will do what the Disney trailers didn't do for me: make you want to see the picture.