A Visit with Janis

Janis Ian came to town to work on an audio book of her autobiography. I was introduced to Janis in 2001 at the Philadelphia Worldcon, just as she was announcing  that she had just met Connie Willis and needed to go cry. She's a fan-girl geek at heart. We met up again the following year and have maintained a lovely friendship since then, solidified when I asked her to be my toastmistress at the 2009 Nebula Awards. Chuck Lorre, who turned out to be a huge fan of Janis' work, was my keynote speaker, and his partner in crime, Bill Prady is an even bigger Janis fan. So Janis' latest L.A. visit gave us an opportunity to get together for a taping of The Big Bang Theory. (The show ran a mere 10 days after it was shot. It's the one about Sheldon refusing to go to Amy's aunt's birthday party so he could play Star Wars on-line with the other guys.) 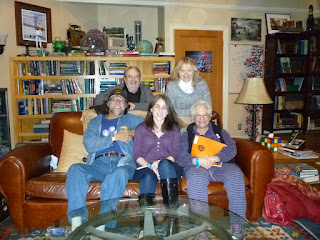 Here we are on the couch in the boys' living room. That's David Gerrold (who introduced me to Len Wein in 1989) and me in back of the couch and my husband, one of our "adopted daughters," Dani Dornfeld, and Janis in "Sheldon's place." 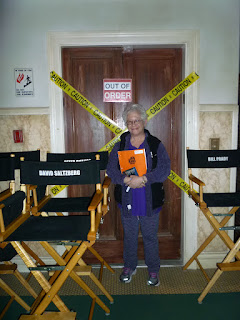 Janis wanted a photo of the forever-broken elevator. This set is redressed for each floor every time you see people using the stairs. They had to dig a hole for the down stairs on the right, because the rest of the set is on the ground floor. Penny's living room and the boy's living room flank the hall way, and those are the three permanently standing sets for the show.. The comic book shop swings with various bedrooms and Amy's stripped efficiency set was where we got to sit with the writers during part of the show. 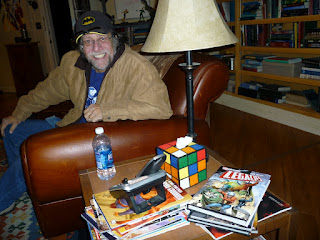 Everyone wanted a chance to sit in "Sheldon's place." When I went to photograph Len in it, I couldn't help but notice that a copy of his DC Legacies hard back was sitting on the coffee table. I did not put it there. When we mentioned it to Bill Prady he said "we know what we're doing."

Janis was in town long enough for us to have dinner a couple of times and she even came by for a Sunday Super Supper Squad dinner. She was very impressed that I made bread and insisted on being photographed with it and Len, who had just donned his Captain America wardrobe. Yes, I am married to a 12 year old. 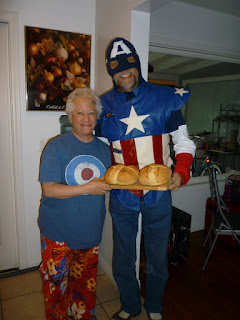 We're hoping Janis will be back out in L.A. to perform again sometime next year. She hasn't been out here as a singer for two or three years now. We could probably fill the audience just with our gang.
Posted by M. C. Valada at 12:41 PM No comments: