Let the Good Times Roll--Someplace Else 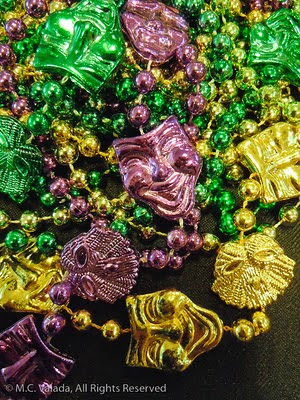 Happy Mardi Gras or Fat Tuesday.  I've never been to New Orleans for Mardi Gras.  I used to want to go, but spending Halloween there about 15 years ago cured me of the idea of going back for the city's biggest party.  Our friend George R.R. Martin once floated the idea to Len that he should join George's krew, but thank goodness that went nowhere.

I'm perfectly happy to honor the holiday by making appropriate food at home, but I hate crowds, particularly inebriated crowds.  We won't be going to West Hollywood tonight, either, but I am planning on making a batch of beignets.
Posted by M. C. Valada at 4:09 PM No comments:

Yes, It Does Snow in Southern California

Here in Southern California, we've had some strange weather.  Last week, there was actually snow and slush on the ground in Burbank when we went to see Cavalia under the big white tent.  Today, the winds were knocking over 18-wheelers on some of the highways.  Yesterday it was in the 70s.  Don't like the weather?  Wait 10 minutes.  I am hoping that the weather stays dry for the next couple of weeks (although today is not promising.)  We've got things to do that require good weather and I don't want Ace to miss another horse show on Sunday because it gets rained out.

It looks like we've sold the old (rebuilt) house. Now we are trying to get the garage emptied so we can close by the end of the month.  We spent a lot of time there on Saturday, clearing space so the inspector would be able to walk through. But there's a lot more to go.  We've also gotten a couple of unexpected surprises.  The inspector said there was no retrofitting of a gas shut off valve when the house was rebuilt, and I was certain that had been done.  Plus, he turned on the pool lamp, which did not stay lit, and we had paid for that to be repaired.  Details, details.  It will get done.

Going through the garage is sort of like having Christmas in March--or going on an archeological dig.  I found a box and unwrapped one of the contents.  It turned out to be a miniature prop from Raiders of the Lost Ark Len had been given by actor Billy Mumy many years ago.  We thought it had been lost in the fire, but it had been packed away a few years before that by my sister when she helped with party prep one year.

I found two brass spigots in the shape of Mickey Mouse, which had never been taken out of the bag that came home from Disneyland the first month Len worked for The Mouse in 1989.  They had fallen on the floor and been covered with grass seed from a bag that was eaten open.  We're planning to replace the outside hose bibs with them.

I just picked up three more boxes that my sister packed up and will open them at our house tonight.  Some of the stuff might be ripe for donation to the Southern California Golden Retriever Rescue yard sale coming up, and some might be put up for sale on E-bay.

Yesterday, I took the time to go to the Pasadena City College swap meet.  I've been wanting to go for months and I knew I couldn't go next month, so, when I woke up at 4:30 and couldn't get back to sleep, I headed out early.

PCC doesn't set up as early as the famous Rose Bowl swap meet, but it also doesn't have an outrageous entry fee.  I like free.  When I arrived around 8, many of the dealers where busy unpacking their wares.  The swap meet is held on the eastern edge of the school, in two parking lots and on several levels of a parking structure.  If I'm by myself, I can do the whole thing in little more than three hours.  I do it mostly for the walk.

My mental wish list generally includes jewelry with a horse motif, pieces of Nambe or the china and silver I collect, and cookbooks.  Yesterday, I was also looking for a gaming table with an inlaid chess board (to display my Lord of the Rings pieces) and an Irish clay pipe, which Len needed for a prop for his improv class.  Pipe-1, table-0.  Len was thrilled I found the pipe and asked where I got it.  I told him I mugged a leprechaun.

I also managed to find a signed sterling silver horse in a trot pose, a Pegasus, and a faux red cameo of horses pulling a chariot with a woman (or goddess) driving.  I'm hoping it will clean up a bit.
Posted by M. C. Valada at 3:26 PM No comments: